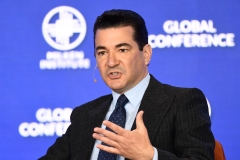 The latest installment of the “Twitter Files” reveals a disturbing connection between Twitter and Dr. Scott Gottlieb, a Pfizer board member who used to head the U.S. Food and Drug Administration.

Gottlieb, FDA commissioner from May 2017 to April 2019, was a media darling during the COVID-19 pandemic, much like Dr. Anthony Fauci.

Pfizer Inc. is one of the pharmaceutical companies that came up with three initial FDA-approved vaccines against the disease. Gottlieb joined the drugmaker’s board in June 2019, before the pandemic.

The new information from inside Twitter shows how “elites” such as Gottlieb with connections to large corporations and the government can twist and suppress what gets to the public, warping society’s ability to speak freely and find the truth.

According to the “Twitter Files” report released by former New York Times reporter—and vaccine sceptic—Alex Berenson, Gottlieb coordinated with the social media giant to suppress alternative policy recommendations for how to respond to COVID-19.

Berenson was at one time banned by Twitter at the urging of the Biden administration, but the ban was lifted after he sued the company.

He now is one of the relatively few journalists that new Twitter CEO Elon Musk trusts to disclose the social media company’s previous internal workings in a series of “Twitter Files” reports.

Here’s an example of what Berenson uncovered in his “Twitter Files” report, from Fox News:

“This is the kind of stuff that’s corrosive,” Gottlieb said in the email to O’Boyle. “Here he draws a sweeping conclusion off a single retrospective study in Israel that hasn’t been peer reviewed. But this tweet will end up going viral and driving news coverage.”

According to Berenson, Gottlieb reached out to Twitter to suppress a tweet in September 2021 that said: “Sticks and stones may break my bones but a viral pathogen with a child mortality rate of ~0% has cost our children nearly three years of schooling.”

The former New York Times reporter noted that Pfizer’s vaccine soon would be approved for children ages 5 to 11, a sizable market for the pharmaceutical giant. Berenson briefed Fox News Channel host Tucker Carlson about what his reporting reveals.

Gottlieb and Twitter coordinated during social media’s craze for affixing “misleading” labels at the height of the pandemic. Big Tech companies not only were slapping warning labels on posts deemed “harmful” to the public, but outright suppressed speech that countered preferred media narratives.

It’s recent information such as what we see in Berenson’s report that justifies the disintegration of Americans’ trust in large institutions.

For those who say, “But Gottlieb was a private citizen, not a government official at the time,” consider a few things.

Twitter and Facebook also coordinated with government, as other “Twitter Files” entries suggest. The line between private and public at the highest level is blurred now, as government agencies cooperate with private organizations that share a similar interest and ethos.

It was deeply irresponsible and outrageous for a tech company to censor information based on the desire of a single public health official, who may have had a serious conflict of interest in the matter. And bad on Gottlieb for using his power to shut up people he disagreed with, even if he thought he was correct.

In the early days of the COVID-19 pandemic, there was much the public and the “experts” didn’t know. Instead of trying to keep the free citizens of our republic informed, with an acknowledgment of the limits of their information, the government and some companies used their power and platforms to manipulate and castigate.

Did Big Tech companies really have the authority to decide what was truth and what wasn’t?

It’s quite interesting going back now and looking at what was labeled “conspiracy theory” and censored during the pandemic.

For instance, Facebook moderated claims that “COVID-19 is man-made or manufactured.” The idea that a strange, new virus leaked from China’s Wuhan Institute of Virology and that Communist China—a regime with a loose affiliation with the truth—suppressed that information apparently was crazy talk in need of censorship.

Facebook stopped moderating this claim only when the Biden administration finally launched an investigation into the Wuhan lab. Facebook acted as if it were an arm of the Democrat Party and censored American citizens seeking the truth.

YouTube censored Sen. Rand Paul, R-Ky., for questioning the effectiveness of cloth masks, citing the authority of the World Health Organization. This was the same WHO that not only flubbed the early response to COVID-19, but appeared to have a deep connection to China.

The Centers for Disease Control and Prevention initially said masks don’t work, then insisted they worked and you need to wear them, then finally admitted that cloth masks likely don’t offer any protection from COVID-19.

The public response to the public health crisis needed a public debate. Some of the few responsible politicians during that time understood this. Handing off all decisions to narrowly focused public health officials and bureaucracies undermined our republican institutions.

The “Twitter Files,” including the Gottlieb revelations, show how it was Big Tech companies, not the people, that caused “harm” during the pandemic. They abused their position of power, thoughtlessly and perniciously silenced dissenters, and pulled Americans away from the process of discovering the truth.

Big Tech did this while destroying its own credibility and the credibility of America’s biggest institutions—public and private—with all but the “believe in science” crowd.

Courtesy of the Daily Signal.