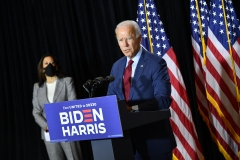 Former Vice President Joe Biden said Monday that he is "not a fan" of court packing, but did not explicitly answer whether he would do it, one way or another.

During a campaign stop in Arizona last Thursday, he also refused to say whether he and running mate Sen. Kamala Harris (D-Calif.), if elected, would push to expand the number of justices allowed on the Supreme Court.

“You’ll know my opinion on court packing when the election is over,” Biden told a gaggle of campaign reporters. “The moment I answer that question, the headline in every one of your papers will be about that.”

Biden and Harris’ repeated lack of candor on whether they plan to manipulate the Supreme Court, their disapproval of the president’s judicial nominees, and their assault on constitutional rights reinforces the belief the two will indeed pack the Court if elected.

Court packing is an idea floated in the 1930s by then-President Franklin D. Roosevelt, who didn’t want to see his New Deal overturned. Upset older, more conservative members of the Court weren’t retiring, Roosevelt pushed for legislation that would’ve added a seat for every justice who, after the age of 70, didn’t agree to step down.

Sen. Harris, when pressed on the issue during the vice presidential debate, refused to say whether she and Biden, like Roosevelt, would push to enhance the number of justices on the Court.

“You want to talk about packing a court? Let’s have that discussion,” she said, repeatedly dodging Vice President Mike Pence’s inquiries on the topic.

Her and Biden’s unwillingness to answer the court-packing question directly makes New York Times columnist Jamelle Bouie suggest she and the Democrat presidential nominee are open to the idea of more than tipping the balance of the Supreme Court in their favor.

“I do think it is interesting that Harris, like Biden, refused to answer a direct question about expanding the Supreme Court. Given their general willingness to shut down the left on other issues, it makes me think this is something they don’t want to rule out,” he said.

As Bouie said, Biden—during the first presidential debate of the election cycle—wouldn’t answer when moderator Chris Wallace asked whether the former vice president would push to dramatically shift the makeup of the Court.

“Whatever position I take on that, that’ll become the issue,” he said. “I’m not going to answer the question.”

His lack of transparency on the issue is evidence enough: It’s clear Biden and Harris, if elected, would push to reshape our Court into a super-legislature that creates laws instead of faithfully interpreting the Constitution and upholding the rights enshrined therein.

As Ken Blackwell, former U.S. ambassador to the United Nations Human Rights Commission, writes, “packing the Court to change political outcomes would forever transform our constitutional system of separation of powers and checks and balances between the three branches of government that has kept this nation free since 1789.”

More evidence the Democratic nominee is inclined to pack the court is his suggestion that the confirmation of President Donald Trump's Supreme Court nominee would lead to Court decisions that radically alter women’s rights.

His apparent disapproval of the judge seems to be shared by Harris, a member of the Senate Judiciary Committee who has a long track record of attacking judicial nominees for their religious beliefs.

Furthermore, Harris voted against confirming Trump Supreme Court nominees Neil Gorsuch and Brett Kavanaugh despite both men’s impeccable qualifications and the lack of corroborating evidence for the sexual-assault allegations leveled against Kavanaugh.

Harris is an extreme partisan and believes she’s above the law, dismissing the principle of “innocent before proven guilty” during now-Justice Kavanaugh’s confirmation process and in the case of an innocent man she let sit in prison when California attorney general.

Jeff Landry is the Louisiana attorney general and president of the Republican Attorneys General Association.