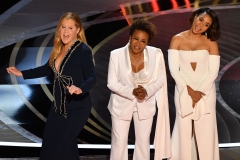 Much is being made about “the slap” at the Oscar presentations, but that’s periphery nonsense in the greater scheme of things. The real slap coming out of the “entertainment” establishment is being delivered constantly to regular Americans and traditional culture. The low-rated Oscar broadcast demonstrates just how detached Hollywood has become from the culture it once helped lead.

Having a high-profile actor assault another entertainer live on stage was certainly bad and showed the lack of class now associated with the entertainment industry. Beyond that, however, the limited viewers who could stand the cultural assault saw an Oscars hostess grope male actors on the stage as part of an unfunny skit that seemed to make light of sexual assault. The awards show opened with a trio of hostesses leading the assembled glitterati in a chant of the word “gay,” an effort to mischaracterize the recently passed Florida law prohibiting classroom discussion of sex for kindergarten through third grade students.

Confirmation of the Hollywood disconnect came just days after the Oscars ceremony in the release of internal Disney corporate videos showing executives crowing about their efforts to sexualize children’s programming. Disney’s entertainment president, Karey Burke, promised that all future programming will meet a fifty percent quota of characters of minority or LGBTQIA status. Burke might want to check with Disney stockholders about her social engineering plan and maybe provide credentials that could suggest she has the wisdom to engineer a society.

The entertainment industry is determined to alter American culture and replace it with an ill-defined and vacuous agenda that, instead of promoting civility and unity, sparks chaos and division. Americans who don’t approve of the cultural profile being endorsed by big entertainment are labeled as unenlightened haters and deserving of being cancelled.

There was a time when film and television provided a unifying function for the nation, serving as societal glue and providing common experiences for viewers across demographic categories. Of course, the creative community has always challenged cultural assumptions and challenged boundaries, sparking discussion and reflection. But today’s obsession with crass ideology, sexual content, and violent themes goes beyond being edgy and provocative.

The media elite are militantly trying to undercut America’s core values and dividing people into splintered subgroups, taking the joy out of entertainment and reducing the pop culture industry to a manipulative mouthpiece of fanaticism. Hollywood producers today surely can’t envision or understand the values of a steel worker in western Pennsylvania or a farmer in Wisconsin. They look down their noses at a church-goer in Tennessee or a parent in Virginia who doesn’t want their second-grader reading sexually explicit books. A guy watching the Oscars broadcast from Nebraska didn’t see a single person on that stage with whom he could relate. Sadly, that is apparently just fine with the self-absorbed show biz elites as they posture and program for each other and a shrinking audience that can still be gulled by the disrupters of culture.

This is how civilizations collapse. Establishment leaders lose contact with the everyday lives of people they are supposed to be serving. America’s politicians are well into being oblivious, as are institutions of “higher” education, where indoctrination supplants real learning. An out-of-touch and disruptive media industry rounds out the trifecta, leaving rank and file citizens wondering if anybody is looking out for them.

Parents Television Council President Tim Winter describes the extent to which seedy and indecorous content has seeped into culture as “casual vulgarity.” That has happened as a direct result of a reckless entertainment establishment that has warped societal standards and tried to convince a nation that the way it views culture is legitimate. It is little wonder that teens today put raunchy, nasty, and exposing material on their media outlets of choice, Instagram and TikTok. Such behavior has been role-modeled by adults poisoning the broader media world.

Ratings for the Oscar broadcast this year were the second-lowest in history. Just over 16 million people watched. Only last year’s COVID depressed ratings were lower. Instead of celebrating audience growth compared to the COVID era, media executives should ponder why so many Americans now have no interest in Hollywood’s awards show. Well over fifty million people annually watched the Oscar broadcasts just a quarter century ago. The media establishment is waging a cultural revolution against America and has virtually all of the ammunition with which to wage the battle. Traditional America has little to fight back with, but they have enough sense to use the “off” button on the remote.