Alice in Government-Land: The First Amendment Turned Upside Down 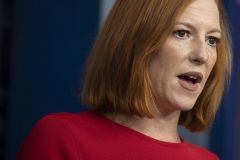 It took seven days, unprecedented – and illegal – protests at the homes of two Supreme Court justices and plans for protests at the homes of another four, and the firebombing of a pro-life group before White House press secretary Jen Psaki would say anything substantive about pro-abortion radicals and their tactics – and even then, she refused to criticize them.

Meanwhile, the ability of the citizenry peaceably to walk the halls of congressional office buildings without an official escort, and to drop in on their senators and representatives to meet without an appointment to make known their views on a piece of legislation, or even to meet with congressional staff, was terminated more than two years ago, and as of this writing looks as if it may never return.

Our Founding Fathers wouldn’t recognize this political environment. They fought a revolution against the world’s greatest empire, and declared their belief in what they labeled "unalienable rights,” and they enshrined those rights in a document that more than two centuries later still stands as the greatest User Manual ever written on self-governance.

One of that document’s best-known sentences, the First Amendment to the Constitution of the United States, guarantees that Congress “shall make no law…abridging the freedom of speech, or of the press, or the right of the people peaceably to assemble, and to petition the Government for a redress of grievances.”

Were the Founders to visit Washington, D.C. today, they would think they had fallen down Alice’s rabbit hole into Wonderland, where up is down, black is white, and night is day. And they would be mortified.

On Thursday, March 12, 2020, the U.S. Capitol and the congressional office buildings shut down to the public. So did virtually every state in the Union.

Since then, of course, every state in the Union has reopened. Granted, some reopened earlier than others. My home state of Georgia, for instance, reopened in April of 2020, just a month after it closed, while others – typically, those under Democrat governors – remained closed for longer periods of time.

Whether early reopeners or late, all of the states have now reopened. But congressional office buildings have not, and visiting constituents who want to meet with their member of Congress are required to make an appointment, and then be escorted through the halls until they arrive at the proper office. The casual drop-in just to let a member or even a staffer know of a constituent’s thoughts on pending legislation is a relic of a bygone era, and may never return.

Meanwhile, the pro-abortion hard-left doesn’t wait around for peaceable assembly, and they don’t bother to abide by the law. They go straight to mob rule, with the perhaps unspoken yet ever-present threat of violence thrown in for good measure.

What’s worse is that Democrat officeholders and senior Biden Administration officials couldn’t be bothered to criticize the lawless behavior of the mob they inspired. I have scoured news coverage in vain for any word of criticism from any senior Democrat, and have found nothing. Not on Tuesday, or Wednesday, or Thursday, or Friday, or over the weekend.

While Psaki finally acknowledged on Monday that President Biden "strongly believes in the Constitutional right to protest,” she added, “but that should never include violence, threats, or vandalism.”

No, of course it shouldn’t. Presumably, it also should not include committing felonies – such as obstruction of justice, which is the federal crime committed by those protesters outside the homes of Supreme Court justices. 18 U.S.C. §1507 makes it a crime punishable by up to a year in prison for anyone “with the intent of influencing any judge, juror, witness, or court officer, in the discharge of his duty” to picket or parade “in or near a building or residence occupied or used by such judge, juror, witness, or court officer….“

So why didn’t she say so? Does she not know that it’s a federal crime to picket or parade outside the residence of a Supreme Court justice? She certainly should. She’s got an entire White House Counsel’s office staffed with smart lawyers who should be able to learn in the time it takes to do a Google search that she shouldn’t be encouraging pro-abortion protesters to protest outside a justice’s home.