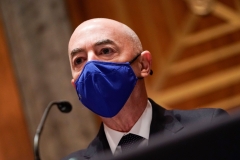 Actions speak louder than words. In the realm of public policy, that axiom has never been more apparent than now, with regard to the disconnect between the Biden Administration’s words and its actions on the illegal immigration crisis on our southern border. With its words, it tries to appear as if it opposes illegal immigration; but with its actions, it sends a signal to the south that the border is wide open and migrants should make their way to points of entry as fast as they can.

It’s no wonder that south of the border, they’re not paying attention to the words that come out of the mouths of Biden Administration officials. Why should they, when they can instead just look at what’s actually happening on the border? When they do, what they see is a border that’s wide open.

Let’s be clear: the Biden Administration planned this from the beginning. Just hours after taking his hand off the Bible at his inauguration, Biden was signing executive orders and proclamations that reversed the previous administration’s harder-line (and more successful) immigration and border security policies – six on inauguration day alone. Among others, border wall construction funds were redirected, DACA was “preserved” and “fortified,” the state of emergency on the southern border was declared terminated, and “discriminatory” bans on entry into the U.S. were ended. Shortly thereafter, “catch and release” was reinstituted, and, even later, the Biden Administration announced its intent to rescind the use of Title 42 as a means to reject asylum seekers.

Moreover, Biden declared his support for the “U.S. Citizenship Act of 2021,” which advocates themselves proudly proclaim “would represent the most sweeping immigration reform legislation in decades and create the largest legalization program in U.S. history.” And when it comes to Democrats, whenever you read the word “legalization,” you can substitute the word “amnesty.”

South of the border, they noticed.

In the first 16 months of the Biden Administration, about 1.35 million illegal immigrants entered the United States, according to a new report from the Center for Immigration Studies.

Do the math. That’s about 85,000 illegal immigrants arriving every single month.

The migration from the south is not over. In fact, it’s about to get worse. According to press accounts, there could soon be another 15,000 migrants arriving at our southern border.

As what could be the largest migrant caravan ever to approach the United States departed Tapachula, located on the Mexico-Guatemala border, Monday, one could only wonder – just what is it going to take to get the Biden Administration to comprehend the depth of its failure, and what will it do if and when it recognizes that it is its own policies that have created the crisis on the southern border?

Department of Homeland Security Secretary Alejandro Mayorkas mendaciously mouths the words. “The border is closed,” he said on the Sunday morning shows back in March of 2021, just weeks after taking office. “We are expelling families. We are expelling single adults.” More than a year later, he was repeating himself: “Do not come...our border is not open,” he told CNN’s Dana Bash on “State of the Union” on May 1, 2022.

But when everyone, and I mean everyone, understands that when Mayorkas speaks, all it means is that his lips are moving, and there is no correlation whatsoever between the sounds that come out of his mouth and the action he’s describing, it doesn’t matter how many times he goes on the Sunday shows to talk. All that matters is that everyone can see the reality of the results of his actions, not his words, and they correctly deduce that with him, it’s not so much the words that matter as the actions.

Mayorkas is a disaster as DHS secretary. Under his “leadership,” the agency is not doing its job. The border is not secure, illegal immigrants come across the border virtually at will, the cartels’ control of the border has been strengthened, and there is no end in sight.

With such a stunningly bad record – so bad it actually raises questions about whether or not he’s deliberately acting in contravention of the Constitution – it’s easy to see why so many are calling for Mayorkas’ impeachment, and it’s just as easy to see why Rep. Andy Biggs (R-AZ) has introduced H.Res. 582, a resolution of impeachment to do just that.