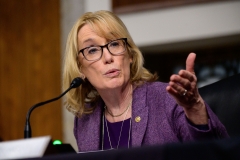 Though we tend to think of the United States Senate as a place where there’s a lot of talk – it prides itself on being known as “the world’s greatest deliberative body,” after all – the fact is, the rules of the Senate offer each of its members the ability to take significant action on policy matters.

So vulnerable Senate Democrats who say they’re upset by the Biden Administration’s decision to end Title 42 don’t have to restrict themselves to just moaning about the problem. Because they’re members of the U.S. Senate, they can actually do something to prove how upset they are: They can block all of President Biden’s nominees from being confirmed until Biden fixes the border security problem he’s brought on.

Until and unless Senate Democrats take this drastic step, we’ll know their words are meaningless, nothing more than rhetoric without action.

On April 1, the Centers for Disease Control and Prevention announced that on May 23, it would end the use of Title 42, a public health authority first deployed by the Trump Administration to effectively block migrants from entering the United States.

According to the Biden Administration’s own numbers, that authority has been used 1.7 million times to block entry into the United States. That’s an awful lot of entry-blocking, and that’s precisely why vulnerable Senate Democrats are screaming bloody murder about the administration’s decision to end its use. Without it, they correctly fear, the surge at the southern border – already a virtual tidal wave, with never-before-seen numbers of migrants arriving at our border – will go from tidal wave to tsunami. Voters, they fear, will look for scapegoats. And without Biden on the ballot to punish, they fear, voters will take it out on the next closest politicos – members of Biden’s party who do just happen to be on the ballot in fall 2022.

Consequently, it wasn’t surprising at all that vulnerable Senate Democrats – that is, virtually every Senate Democrat who’s on the ballot in 2022 – raced to put out their press releases decrying the Biden Administration decision. Mark Kelly of Arizona said, “I warned them about this months ago…the administration hasn’t even prepared, and they don’t have a plan for what to expect.” Maggie Hassan of New Hampshire said, “Repealing Title 42 without a plan in place will do nothing to promote a responsible border policy that keeps our country safe and lives up to our humanitarian values.” Nevada’s Catherine Cortez Masto said, “This is the wrong way to do this and it will leave the administration unprepared for a surge at the border…the administration is acting without a detailed plan.”

Blah, blah, blah. If I had a nickel for every time a politician said something to curry voters’ favor without ever meaning to actually do anything about the problem he or she was complaining about at the time, I’d have an awful lot of nickels.

Luckily for Kelly, Hassan, Cortez Masto, and the others, they don’t have to confine themselves merely to complaining. Because they are members of the United States Senate, they have significant influence over the course of politics in the nation’s capital – and one giant tool they can use to get what they want, if they really want it enough.

To be specific, membership in the United States Senate gives each of them the power to block the confirmation of any, or all, of Biden’s nominees. They could be nominees to the federal bench, or nominees to serve in sensitive senior-level positions in executive branch agencies, or even senior leadership positions in the quasi-independent agencies of the federal government. All they need for this exercise is to be a nominee to a position that requires confirmation by the United States Senate.

As for the power held by individual senators, I’m not talking about the esoteric power to place a “hold” on a nomination, I’m talking about the very basic casting of a vote. The Senate is split 50-50 right now. That means every single Democrat has the power to use a promised vote against an individual nominee as a tool to pry loose from the Biden Administration something it wants; if the Biden Administration chooses not to pay the price in policy, the senator in question could follow through and vote down the Biden nominee.

In the current 50-50 Senate, with Sens. Kyrsten Sinema (D-AZ) and Joe Manchin (D-WV) not willing to buckle under the wild demands of the hardcore left to jettison the filibuster and break the Senate, there is no prospect of significant partisan legislation passing. That means confirming Biden nominees is the only thing Majority Leader Schumer can count on as a means to advancing the Biden agenda.

Kelly, Hassan, Cortez Masto, and the others could threaten to block those confirmations until and unless the Biden Administration reversed its decision to end Title 42 without a plan in place…if they were serious about opposing the decision.

In fact, this is the only tool these vulnerable Senate Democrats have at their disposal if they’re serious. The good news is, there’s no hiding the gambit. They can threaten to start blocking confirmations, and we’ll all see the seriousness of their determination to really do something, or…not.

The ball is in their court.