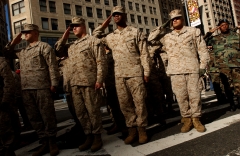 The cancel culture has come for the United States Marine Corps. How they respond may reveal whether service members of faith have a future in the U.S. Armed Forces.

Over the week of July 13, more than 100 Marine Corps reservists were slated for training on military tactics and leadership using the Battle of Gettysburg as the example. Like everything else in 2020, their plans for meeting in person changed due to COVID-19. Instead of meeting in-person, the training shifted online.

Instead of sweltering in the Pennsylvania summer heat, the Marine JAs (“Judge Advocates”—Marine lawyers) were told to prepare by watching a few videos about Gettysburg. The training would then consist of few lectures by a retired U.S. Air Force officer and former professor at the U.S. Air Force Academy on the significance of Gettysburg.

The videos were innocuous. One was a series of videos produced by the National Park Service providing a virtual tour of the hallowed battlefield. Another was the dramatic production of the battlefield map showing how the battle evolved over time, complete with animated battlefield lines, troop movements, and moving black and white images of fallen soldiers strewn across Gettysburg’s boulders, forests, and fields.

Suddenly, the Marine Corps reservists received word that the lectures were cancelled. An activist claimed that the speaker was “a fundamentalist Christian extremist parachurch official associated with Campus Crusade for Christ (‘Cru’).” Further, for the Marines to host this speaker as part of a mandatory training, the activist claimed, “viciously violates the No [sic] Establishment Clause of the First Amendment of the Bill of Rights” among other laws, policies, and regulations.

It would, indeed, be strange to openly violate whatever the “No Establishment Clause” of the First Amendment is in front of a roomful of Marine Corps attorneys. How could this possibly be? Was the speaker’s presence, as the activist claimed, “just totally illegal?"

The only connection to religion in this entire situation stems from the speaker’s bio. Like many speaker bios, it supplied his credentials: 20+ years as a U.S. Air Force navigator, prestigious education credentials, and more than a decade as a professor at the U.S. Air Force Academy. It also included personal information about the speaker, including reference to his Christian faith, affiliation with a Christian nonprofit organization, and a URL to a personal website advertising for a private, religious conference he leads.

Within minutes of receiving the activist’s trumped up complaint, the Deputy Staff Judge Advocate to the Commandant of the U.S. Marine Corps, a colonel, personally called the activist to assure him that the speaker had been cancelled.

Let us be very clear: the Marine Corps bravely cancelled a speaker chosen to lead a discussion on the battlefield tactics and leadership lessons of Gettysburg based upon his expertise as a retired military officer and academy professor because that retired officer, in his speaker’s bio, confessed to be religious and associated with a religious organization.

Such open discrimination against people of faith is unbecoming of our beloved Marine Corps. From Article VI of the U.S. Constitution to cases like Trinity Lutheran to numerous Department of Defense (DOD) policies, the law is clear: the government cannot require a religious test for office, nor insist that religious people be excluded from benefits—like teaching to a class of Marine Corps reservists—because they are religious.

Americans expect the Marine Corps to train warriors for battle, not cater to the cancel culture. If we are to the point of the Marine Corps believing that a person’s religious affiliation is an Establishment Clause violation requiring that person to be cancelled, our freedom is in serious trouble.

In case you are wondering, the reservists were subjected to a discussion about systemic racism in place of the hoped-for lecture on Gettysburg, its history, and lessons on battlefield tactics and leadership.

If the DOD will exclude an expert in military tactics and history because of his personal religious beliefs and association with a religious organization, how long before the DOD excludes service members professing religious belief from military service?

An institution charged with developing the world’s finest force of warriors should never again surrender to complaints that someone is religious.

Jeremy Dys (@JeremyDys) is Special Counsel for Litigation and Communications for First Liberty Institute, a non-profit law firm dedicated to defending religious freedom for all Americans. Read more at FirstLiberty.org.