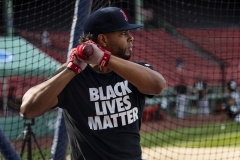 The strangest of baseball seasons became even more bizarre as it took on political overtones by openly supporting Black Lives Matter. In so doing, the baseball establishment broke a revered rule by which sports remained one of the few cultural spaces that was not politicized.

Rigid rules have long kept players from using the baseball platform to express political opinions or promote causes. Infractions could mean fines or suspensions. Fans knew that they were going to watch a game—not join a political rally.

Although baseball was not politicized, it was patriotic. The sport is archetypally American. Many saw the games as an embodiment of American grit and determination. Even those who are not baseball fans recognized its ability to unify the nation. Baseball ranked with those things like apple pie that conjure up nostalgic images of what life used to be in America.

This vision of baseball as America’s national pastime is now all but gone. One could say that it died on opening night, 2020. Those who promote the radical revolution in America today know that they must destroy every unifying factor, even the most apolitical. Baseball has no place in a revolutionary America.

The 2020 baseball season is already in a state of chaos. The coronavirus crisis has delayed and shortened the season. The games will start in empty stadiums without live fans, although some games will be “watched” by cardboard cutouts of fans.

To make matters worse, Dr. Anthony Fauci, the COVID specialist, delivered the opening pitch at the Nationals’ Stadium. He threw the ball completely off target in a gesture that many saw as a bad omen of things to come in the new post-COVID season. Commentators could not resist relating his baseball savvy with that of his COVID projections.

Take Me Out to the Politicized Ball Game

However, the scene that disconcerted millions of baseball fans was the opening lineup of players before the national anthem at the July 23 Yankees/Nationals opening game. Every player, each holding a part of a giant black sash, took a knee during a long moment of silence to acknowledge racial "injustice." The official kneeling signaled baseball’s entry into the controversy that enraged footfall fans everywhere.

To many who viewed the scene in the media, the teams’ kneeling signaled baseball’s end as a national pastime. Baseball was usurped and became a political tool in the hands of the coming revolution. Even those with vague leftist sympathies failed to see what all this had to do with a baseball game.

And yet it has everything to do with a revolution that knows how to manipulate symbols and find ways to bring its message into the daily lives of Americans.

Many are appalled by the rapidity with which the baseball establishment caved to the left’s demands. Baseball management went from intransigent champions protecting their sport from politicization to willing facilitators ready to submit to anything the left proposed.

Indeed, team owners seemed to fall over each other in their scramble to show zeal for their new cause. They pulled out all the stops to embrace the BLM agenda and message.

Turning the Game into a BLM Event

The opening game was a BLM propaganda show. The teams made “Black Lives Matter” t-shirts available for players to use during warmups. A stenciled Black Lives Matter text appeared on the Nationals’ pitcher’s mound for their season-opening series against the Yankees.

The drama intensified with a BLM-themed video played on the main scoreboard made by the Players Alliance, a social justice-oriented group of former and current black professional baseball players.

Major League Baseball also announced that it would allow its players to promote social justice issues on the field. Players can wear jersey patches with BLM or “United For Change” on their uniforms. It appears no disciplinary actions will be taken against those who kneel during the national anthem as many have already done so at pre-season games.

An almost identical program was adopted by the National Baseball League’s opener between the Dodgers and Giants at Dodger Stadium in Los Angeles.

This complicity takes place despite the well-known fact that the BLM’s program includes socialist, anti-family, and anti-police messages found on its website and statements. It seeks to “disrupt the Western-prescribed nuclear family structure.” The movement also claims to "foster a queer‐affirming network” and seeks freedom from “the tight grip of heteronormative thinking.”

Perhaps management thought that by conceding to the left, they could satisfy its demands, and the major leagues could play ball normally in this strange season. However, the politics of “give in a little not to lose all” has never worked in dealing with the left.

The left will always demand more. Its present policy is to change America by destroying all unifying points. It will use baseball as a platform until it is no longer needed. When the revolution comes, those who concede are the first victims.

Maybe baseball officials thought they could ingratiate themselves with liberals by adopting this new policy. Teams could make more money by appealing to more people. However, the club owners have struck out with a losing strategy that will satisfy no one. Giving in works against their self-interest and bottom line. The baseball establishment is offending its most loyal fan base.

Many long-time fans will quietly and simply leave. And no one will replace them.