Sin: The One Influence Not Allowed to Explain Our Crisis 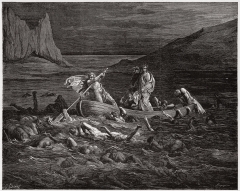 As the midterms fade away, most conservatives are left feeling uneasy about the results. The pundits and media have had their day in explaining why the Republicans did so poorly. Fingers pointed everywhere with all sorts of accusations, credible and farfetched. No one is completely happy with the explanations.

However, one factor weighs heavily upon the state of the nation. It does not explain everything, but it does clarify something. That factor is sin. It is a forbidden topic that most people reject as an influence. Its use offends many who only see things in political or economic terms.

A Forbidden Topic Against the Liberal Order

The mention of sin “sins'' against the tenets of the liberal political order. Nineteenth-century liberalism held that government and civil society are value-neutral platforms that exist solely to maximize personal happiness and prevent individuals from hurting others.

Liberals tend to ignore sin as a subjective judgment in a world without objective right or wrong. People might even believe in sin (if it makes them happy), but it should not intrude upon the lives of others. Everyone should be allowed to do anything, even sin, as long as it does not hinder another’s happiness.

In such a liberal value-neutral world, everything takes on a Hollywoodian air, full of fun, laughter and superficiality. It is like a cruise ship on a never-ending cruise where all suffering is avoided.

Of course, such a world does not exist since everyone experiences suffering and death. However, the official narratives of liberalism can mask this suffering by having people assume Facebook-style happiness. Meanwhile, the super-organized state and automated technology ensure the world works according to plan.

Today, this liberal illusion is fast fading. Sin appears as a factor that can help explain what is happening. The prevalence of sin has increased so much that liberal narratives can no longer hide it. Sin has political consequences, and the nation is feeling it mightily. Like it or not, failure to follow the Ten Commandments will always lead to personal and national disaster.

Sin is much more than a personal decision. It breaks up relationships that spill out into society. When marriages break up due to the sin of adultery, for example, everyone pays since it destroys businesses, changes communities, affects children and often asks the government to provide services. The sin of theft in any form destroys security, endangers property and creates victims.

Sins like procured abortion, unnatural vice and pornography corrode character, conscience and health with drastic outcomes for all involved and those around them. Pride makes people think of themselves as the center of the world. These sins have the political consequences of diminishing personal responsibility and increasing government intervention. People vote for those who promise to facilitate their gratification, which is often sinful.

Sin accumulates, perpetuates and multiplies quickly. Individual sins create the atmosphere for others to sin. That is why the Church always tries to take away the occasions of sin. People sin together as a group or nation, such as acts of promotion of sins like abortion. A sinful nation becomes a sad and challenging place to live and govern. When sin dominates, unity is impossible.

This plague contributes to the breakdown of the super-organized society that tries to mask the consequences of sin. Pandemics, war, recession, unrest and crime only worsen matters by breaking down the framework that keeps society functioning. Thus, people are now exposed to the full effect of sin upon society.

However, the worst thing about sin is that it offends God and deprives people of His friendship and blessings. Indeed, this grievous fault is the chief reason for avoiding sin. Any solution abandoning sin must consider this great God, Who is all Good and deserving of all love.

Thus, admitting the effects of sin is a shocking conclusion for a society still connected to the liberal dream of a world without suffering. Perhaps one factor (certainly not the only one) for the terrible election results is sin. People are attached to sin. Significant sectors of a decadent electorate are bad. Evil things are happening everywhere. Sin has consequences that have polarized the nation. It sets the stage for a culture war that reintroduces the notions of good and evil, right and wrong, sin and virtue.

People still dare not use the word “sin” for fear of being seen as judgmental. However, the sensation of evil is such that many are looking outside the liberal box for answers.