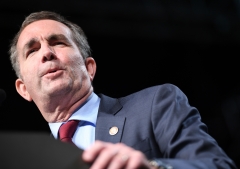 Virginia is the home of more founding fathers than nearly any other state. Anyone who passed high school history or caught “Hamilton” on Disney+ should know that. But many may not know that Virginia was a trailblazer for promoting ideological diversity, particularly in the realm of religion.

For the first several decades of our nation’s history, state governments could establish state religions, which often required citizens to attend and financially contribute to certain churches. But Thomas Jefferson and James Madison wanted a more pluralistic approach. Before the Revolution was even over, they helped lead the charge for the Virginia Statute for Religious Freedom to put an end to such practices in Virginia. Why? Because they cherished a simple belief: No Virginian should be forced by the government to support religious ideas they don’t agree with.

But now, this fundamental Virginian ideal that has long protected people of various faiths and political persuasions has been lost, thanks to the actions of Gov. Ralph Northam.

Northam recently signed the so-called “Virginia Values Act,” which imposes the government’s orthodoxy on issues of sexual orientation and gender identity upon all Virginians—including churches, religious schools, and other ministries. Under this new law, those faith-based nonprofits are banned from adhering to their religious beliefs on these subjects.

This law also harms creative professionals, such as Leesburg photographer Bob Updegrove. As a devout Christian, Bob believes marriage is a sacred relationship between one man and one woman, so he is unable to use his talents to promote any contrary view of marriage no matter who asks him.

At the same time, Bob uses his photography skills to serve all people, including those who identify as gay or lesbian. For example, he would happily use his artistic abilities to help an LGBT businessowner promote their gym or restaurant. That’s not good enough for state officials though. They demand that Bob participate in and create photographs promoting same-sex weddings, even though promoting these views violates Bob’s conscience. And if Bob declines to do so, he faces fines up to $100,000, as well as uncapped attorneys’ fees and damages.

But Bob shouldn’t be forced to promote messages that violate his core convictions, and neither should other creative professionals. The government shouldn’t force Muslim vocalists to sing about Jesus’s divinity at a church service or compel pro-choice graphic designers to create art promoting pro-life political candidates. Similarly, atheist authors or printers shouldn’t be forced to write or print pamphlets proclaiming that Jesus rose from the dead.

Artistic freedom should be protected for all Virginians, including Bob. The state doesn’t get to pick which “values” it censors and which it doesn’t. Tolerance is a two-way street. That’s why Bob has filed a federal lawsuit with the help of Alliance Defending Freedom, for whom I work. I will be arguing on behalf of Bob at a hearing on Friday, asking the court to halt enforcement of Virginia’s law against him while his lawsuit goes forward and to deny the state’s motion to dismiss the case.

Sadly, the woes don’t stop with artistic freedom. A companion law to the so-called Virginia Values Act, HB 1429, now requires employers to provide health insurance coverage for gender "reassignment” procedures—including for minors—even though many people have objections to participating in such procedures. Most Americans don’t want to be forced to indirectly participate in sterilization procedures that can do permanent physical and psychological harm, and their conscience rights cannot simply be tossed aside by the government.

Clearly, Gov. Northam and the activists behind these laws are ignoring the principles Virginia has long espoused. Virginians deserve better than this and should return to the ideals that have historically represented Virginia at its best.

Recognizing the intimate and complex nature of religious matters, Jefferson and Madison took actions to ensure Virginians could live freely according to their consciences. In the spirit of Virginia’s state motto opposing tyranny, “Sic Semper Tyrannis,” they helped Virginia become one of the first states to truly advance freedom for everyone, including those who weren’t religious at all. This was a worthy cause then, and it remains a worthy cause today.

The government should not dictate your conscience on these matters, no matter who you are. That is what Virginia values are truly about.