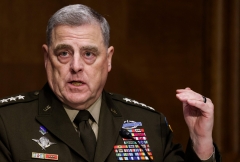 No institution is exempt from the American public’s growing distrust of the federal government. Even the military, which has traditionally enjoyed broad support from Americans of all political stripes, is now seeing its otherwise pristine image take a hit.

According to a survey the Ronald Reagan Institute recently published, trust in the military has plummeted precipitously. Perpetual wars and the ongoing “woke” experimentation taking place within the military have made the public significantly jaded about the institution. Ironically, the mainstream Right has grown more hostile toward it.

Fox News host Tucker Carlson has made it part of his routine to ridicule the American military’s latest efforts to implement culturally leftist policies. Other right-wing pundits have piled on in lambasting America’s woke military, showcasing a remarkable decline in the American Right’s trust in America’s armed forces.

Such scenarios would have been almost unheard of in the early aughts. The Bush era was a time when it was common to see conservatives donning decals and bumper stickers that read “If You Can’t Stand Behind Our Troops Feel Free to Stand in Front of Them.”

Those sentiments have completely reversed in the era of the “Great Awokening,” when virtually all entities — public and private — have been enveloped by the diversity, inclusion, and equity mania. As a result, entities like big business and the military, which the American Right usually holds in high esteem, are now the objects of ridicule and derision.

If there is one thing the current political realignment has taught us, it is that political coalitions are not as permanent as we think. Similar trends are playing out in real time. The liberal Left is defending the intelligence community and even pushing their narratives in various regime change efforts abroad. This lies in stark contrast to the Vietnam War–era Left, which vociferously called out the intelligence community and broader military apparatus. The times sure have changed.

Some people may lament this, but the U.S. military has functioned as a blunt instrument for bellicose politicians and parasitic interest groups such as defense contractors. With few exceptions, the tasks the military has carried out in the past century have precious little to do with defense.

If the Right were serious about effecting change and not assuming its predictable role as a false opposition to the Left, it would start by redirecting its attention toward state defense forces and militias. These defense bodies serve a useful function and defend a given state’s territory. State governments like Florida and Oklahoma are already moving in their own directions to reassert the power of state defense units.

This is a more worthwhile endeavor than the present military worship. After all, we’re dealing with an American state that is openly embracing the culturally radical leftist fads such as Black Lives Matter, which will be invariably exported abroad — through soft- and hard-power means — due to the missionary nature of American foreign policy.

Truth be told, the road to bringing about a modicum of sanity to our present system will not be linear, and it will be filled with rough patches along the way. It will ultimately require people to be willing to part ways with institutions they previously held in high esteem.

One could make the case that the military had a legitimate function in previous periods of American history marked by more restrained governance, but those eras have long passed. Now the military is a blunt instrument used to realize the geopolitical fantasies of a parasitic foreign policy class that faces little to no consequences for its misdeeds. As if the military’s role in serving as a battering ram for a decadent ruling class weren’t enough, its becoming a laboratory for woke social experiments should make any sane person strongly reconsider their blind attachment to the armed forces.

The military’s woke drift is as tragic and farcical as it gets, but there’s always a silver lining. People are now realizing that there’s nothing special about the military. In fact, it can be just as vulnerable to the cultural blight that’s become rampant throughout the West. Plus, the military’s degradation should disabuse people of the wrongheaded idea that there will be a return to “normal.”

To move forward and avoid falling into the proverbial kitchen of civilizational decline, sacred cows must be slaughtered. The military will be one of those golden calves that must be put out to pasture.