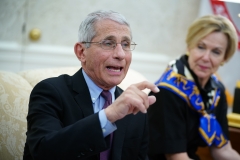 How often have we heard the “trust the science” comment when discussing the COVID-19 dictates of our government? It seems that even in his state of confusion, Biden can tell America that his COVID policy is based on “science, not politics.” But one of his advisors, Dr. Anthony Fauci, is not only very political, but also controversial. So, who is Anthony Fauci?

Anthony Fauci is “an American physician-scientist and immunologist who serves as the director of the U.S. National Institute of Allergy and Infectious Diseases and the chief medical advisor to the president.”

We do not see Fauci described as a political operative, yet his actions suggest otherwise. For example, Fauci was proud to announce to the World Health Organization’s executive board that President Joe Biden will soon rescind the pro-life Mexico City Policy "as part of his broader commitment to protect women’s health and advance gender equality at home and around the world."

We have also noted that, over the years, Fauci has been associated with the use of fetal cells in AIDS research as well as the current controversy involving his agency’s taxpayer-funded research using baby body parts. As usual, the pro-life people who pointed out the flaws in Fauci’s statements were dismissed as unreliable, but the facts speak for themselves.

Despite his sketchy history, Dr. Fauci was invited to the Vatican to talk about the coronavirus and vaccines, having been joined by officials from the Moderna and Pfizer pharmaceutical companies. In retrospect, we find this very interesting because the theme of the conference was “Exploring the Mind, Body & Soul....How Innovation and Novel Delivery Systems Improve Human Health.” Yet speakers included secular for-profit corporate executives whose bottom line is financial success, which appears to be far removed from spiritual food for the mind or the soul.

So what did we do? We taught Chinese scientists how to carry out gain of function research in our own labs at Galveston and at the University of North Carolina -- that’s Fauci-funded research. And then to make matters worse, we actually sent money to China.

But the most interesting part of Fauci’s recent history is his departure from the Catholic Church and his reasons for doing so. In 2020, he advised Catholics not to receive the Eucharist and said he was suggesting this “as a Catholic.”

But in a 2003 interview with Science Magazine, Fauci said: “Broadly and generically, I am not a regular church-attender. I have evolved into less a Roman Catholic religion person to someone who tries to keep a degree of spirituality about them. I look upon myself as a humanist. I have faith in the goodness of mankind.”

And now in 2021, the Humanist organization has awarded Anthony Fauci the Humanist of the Year award. The American Humanist Association defines humanism as “a joyous alternative to religions that believe in a supernatural god and life in a hereafter. Humanists believe that this is the only life of which we have certain knowledge and that we owe it to ourselves and others to make it the best life possible for ourselves and all with whom we share this fragile planet.”

The very fact that an organization that denies God has chosen Dr. Fauci as a recipient of this award says all we need to know about him. The award he received has also been given to people such as feminist icon Gloria Steinem, CNN founder Ted Turner, population control advocate Werner Fornos, former Planned Parenthood Federation of America president Faye Wattleton, and Planned Parenthood founder Margaret Sanger, to name but a few.

Being aligned with some of the worst anti-life people underscores the trouble with Dr. Fauci. Even Bill O’Reilly has written of his deceiving ways.

Dr. Anthony Fauci is not a pro-life advocate. Sadly, neither is he a lover of truth. Yet it is our task to pray for him, recalling the words of martyred priest St. Maximilian Kolbe:

No one in the world can change Truth. What we can do and should do is seek truth and to serve it when we have found it. The real conflict is the inner conflict. Beyond armies of occupation and the hecatombs of extermination camps, there are two irreconcilable enemies in the depth of every soul: good and evil, sin and love. And what use are the victories on the battlefield if we ourselves are defeated in our innermost personal selves?