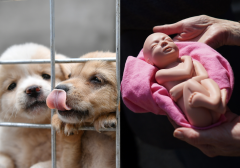 Pope Francis commented on a trend whereby people are increasingly deciding to own pets instead of deciding to have kids. (Photo credit: TPG/Getty Images and MANDEL NGAN/AFP via Getty Images

The memorable nursery rhyme about what little boys are made of—namely “snips, snails, and puppy dogs’ tails” — reminds us of the gaiety of childhood. But today, as Pope Francis has said, those words represent a different tale.

In a recent general audience, the pope said: “Yes, dogs and cats take the place of children. Yes, it’s funny, I understand, but it is the reality, and this denial of fatherhood and motherhood diminishes us, takes away humanity.”

As if it were anything but a coincidence, Danielle Holland, a mother who has her own podcast, recently wrote:

"Choosing an abortion was the most selfless act of my life. It is from a deep place of love that, as mothers, we choose what is best for our families. We have to break past the national channeling of 'in cases of rape or incest' and declare this truth of selflessness. It is love that leads us to not bring another child into a household lacking in it. Or into an abusive relationship. Or a home where the foundations have long since crumbled. It is love that allows us to assess our resources, their limitations, and the communal support systems we may or may not have."

According to her bio, Holland is “an essayist, freelance writer, and host, producer, and founder of 'Sorry To Podcast This,' a podcast collective focused on amplifying the stories and voices of those dedicated to justice and collective liberation.”

But Holland has no idea what the word justice really means because she is a mother who chose to kill one of her children in the name of love and then describe this killing as a selfless act. Hers is a twisted perspective that is all too common in our society today. Love has become a synonym for me, myself, and I. But devotion to self is anything but love.

I wish Holland’s heart had been touched by these words written in 1 John 3:1: “See what love the Father has bestowed on us that we may be called the children of God. Yet so we are. The reason the world does not know us is that it did not know Him.”

In the absence of a sincere desire to recognize God and His gift of a child, the reason Holland chose death for her preborn child becomes obvious. Her world revolves around that very cultural attitude of which Pope Francis spoke. And when the value of individual human dignity is denied, the truth of motherhood and/or fatherhood is at first inconvenient, then declined, and ultimately rejected.

St. John Paul II once wrote: “Motherhood involves a special communion with the mystery of life, as it develops in the woman’s womb. The mother is filled with wonder at this mystery of life, and ‘understands’ with unique intuition what is happening inside her. In the light of the ‘beginning,’ the mother accepts and loves as a person the child she is carrying in her womb.”

But when refutation of all that encompasses motherhood occurs, the option of death becomes as simple as choosing which salad dressing one would prefer. Such callous disregard for human life, which started with the violent act of aborting an innocent child, has led to violence of every type against human beings.

It is tragic that few recognize the evolution of disdain for the most innocent in our midst—an evolution that proceeds to a point where outrages such as House Speaker Nancy Pelosi’s inane idea of erasing all references to either sex from House of Representatives business begin. House Democrats have a desire to “honor all gender identities” — an idea that defies fundamental biological facts but coincides with their absolute disdain for preborn children, parenthood, morality, and common sense.

In an age when it would be easy to ignore these assaults on truth, especially the remarkable gift of parenthood, we are well served to remember these words of Pope Benedict XVI: “The crisis of fatherhood we are living today is an element, perhaps the most important, threatening man in his humanity. The dissolution of fatherhood and motherhood is linked to the dissolution of our being sons and daughters.”

The horror story that unfolds when human beings cherish their dogs and cats more than they do the gift of being capable of procreating children within the bond of marriage is a story we strive to expose every day. The reason is obvious: In a nation that rejects God’s design — human personhood for the most innocent among us — there is no limit to the additional atrocities man can impose.

It serves each of us well to remember Flannery O’Connor’s prescient quote: “In the absence of faith, we govern by tenderness. And tenderness leads to the gas chamber.”