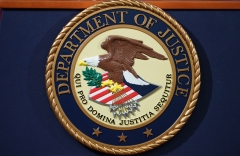 Featured is a seal for the Department of Justice. (Photo credit: MANDEL NGAN/AFP via Getty Images)

Can you imagine your hometown needing permission from the Department of Justice to move a polling place down the street for a local election?

Since the For the People Act (HR1) failed in the Senate, Democrats already have a replacement bill in the queue that would give the federal government this kind of sway in local elections.

The John Lewis Voting Rights Advancement Act (HR4) would be a huge step backward for election security and state sovereignty. It’s a shameless attempt to seize power over state election laws and sabotage election integrity reforms made by states nationwide since the 2020 election by giving the federal government oversight over everything from voter ID requirements to polling place locations.

The authority would come from reinstating an old “preclearance formula” that was originally established in the Voting Rights Act of 1965, which required select jurisdictions—mostly located in the South—to get preapproval from the Department of Justice (DOJ) or the U.S. District Court for D.C. before changing their own state election laws.

The formula was originally used to combat racial disparities in voting access during the Civil Rights era. But it was never meant to be a permanent provision of the Voting Rights Act and was finally reversed by the U.S. Supreme Court in 2013.

The Supreme Court recognized that the formula made sense in 1965, but it doesn’t make sense now. According to the Heritage Foundation, “the registration and turnout rates of black voters were on par with or even exceeded those of white voters in many of the covered states” by 2006. According to the U.S. Census Bureau, voter turnout rates for the 2020 election were higher across all racial groups than they were in 2016.

Even so, HR4 would be a return to the old formula, under which targeted states and localities—the Republican ones—would have to petition the federal government to prove why their proposed changes are not discriminatory.

Rather than starting from the belief that changes to election rules are requested in good faith, the federal government will assume that state laws are racist and discriminatory until proven otherwise.

Well, not all states. The formula will only be enforced on states deemed by the federal government to be higher-risk racists. Not only is this a wildly offensive notion, but it’s also a blatant violation of our founding principle of equal sovereignty among the states.

How would federal bureaucrats decide which states they consider mature enough to make their own laws and which ones are not? According to HR4, they would tally legal actions alleging violations of the 14th Amendment, 15th Amendment, the Voting Rights Act, or any other federal voting discrimination law, regardless of merit. This includes frivolous lawsuits filed by advocacy groups and out-of-state law firms that were specifically intended to obtain lucrative settlements.

According to the bill, nine such acts, by any locality—including frivolous settlements—plus one by the state legislature within the past 10 years would be enough to subject every locality in that state to the preclearance formula. The entire state would also come under review if the DOJ objected 15 times to the same locality over the past 25 years.

In practice, this means your town would be punished for incidents of discrimination that took place on the other side of the state, where you have no knowledge, responsibility, or control over what is happening.

Fifty-eight percent of all voters do not support allowing federal officials to "directly target certain states and override the will of the voters," including 43 percent of Democrats. HR4 does both.

The Voting Rights Act already outlaws any voter discrimination based on race, color, and membership in certain language-minority groups, and it is enforced in every state nationwide. HR4 would not in any way strengthen the protections currently in place under the Voting Rights Act.

So, what is this bill really about?

It’s about violating federalism as outlined in the Constitution and treating people who disagree with your politics as guilty until proven innocent. It’s about finding a way to interfere with election laws in other states while end-running elected officials and voters.