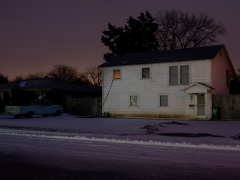 A light is seen from a house in Waco, Tex. as severe winter weather conditions over the last few days have forced road closures and power outages across the state. (Photo credit: MATTHEW BUSCH/AFP via Getty Images)

Snow, ice, and negative temperatures in the Lone Star State—what in the world is happening in Texas? And for that matter, in the greater Southeast?

The short answer is, demand for power and heat skyrocketed due to bitterly and unusually cold weather, pushing Texas’ electricity sector to the brink. It seems some bad timing hasn’t helped either, as some power plants were down for scheduled maintenance right when the snow, ice, and cold hit.

As the Electric Reliability Council of Texas, the state’s electricity market operator, reported, “Approximately 185 generating units have tripped offline for one reason or another. Some factors include frozen wind turbines, limited gas supplies, low gas pressure, and frozen instrumentation.”

Equipment not hardened for such cold temperatures froze along fuel supply infrastructure and at multiple generators, and natural gas resources were diverted from generating electricity to supplying heat.

Of course, it’s not entirely as straightforward as that. The challenges get deep into the intricate and complex business of balancing the physics and economics of generating, purchasing, and delivering electricity.

The Electric Reliability Council of Texas, the Federal Energy Regulatory Commission, and the North American Electric Reliability Corp. are opening up their own reviews and investigations of the situation—both in Texas and of the greater bulk power system—to better understand all that’s happened in the last few days and where fixable reliability vulnerabilities may be.

Nevertheless, the complexity of the situation hasn’t stopped hasty headlines and political point-scoring. Some are blaming renewable energy for rolling blackouts, but this doesn’t hold up.

Texas has perhaps one of the freest electricity markets in the country, making it one of the best and most accessible markets for both renewable and conventional energy technologies to come online to meet customers’ needs and preferences. In the face of this unusually terrible weather, no one energy resource or technology can shoulder the blame.

Further, to bolster Texas electricity infrastructure with hardware more suited to northern winters, as some suggest should have been done, comes with costs. Customers may not want to pay extra for “black swan” events like this, but answering that question will most certainly be part of the discussion in the months ahead.

But these two go hand in hand—high prices are an important part of the system, sending valuable signals to investors to build more energy infrastructure.

To blame Texas’ market design is also to ignore similar desperate situations in the past under the very different market designs of California this past summer, or the mid-Atlantic and Northeast during the polar vortex of 2014 and of 2018, or the similar struggles the rest of the Southeast is experiencing now.

All of these markets have their own idiosyncrasies, but can be generalized either as state-sanctioned monopolies or competitive electricity markets with consumer choice. In either case, both have struggled mightily at times to navigate extreme weather like this.

And as politically convenient as it might be for some, the current governor of Texas can’t shoulder lone responsibility for the situation.

The Texas legislature restructured its electricity sector to a competitive market and customer choice model in the 1990s and early 2000s, and the Electric Reliability Council of Texas, as the regional market operator, faces accountability from the state legislature and the Public Utility Commission of Texas.

People are understandably looking for someone or something to blame, but so far it appears that there’s little better answer than the merciless weather. Time will tell, but there are at least a few things we can take away already.

First, weather emergencies happen, and will continue to happen. This cold, hard reality gives reason to pause before policymakers and voters push to orient the electricity sector around arbitrary political goals rather than principles of affordability, reliability, risk calculation, and dynamic access to electricity markets.

Slogans like “30% renewables by 2030” are catchy and propping up certain energy resources may be politically expedient, but neither put the emphasis on the most important things.

Second, affordable, reliable energy is a key building block to our well-being. No one wants to experience this kind of hardship, and already there are reports that people have died from this extreme cold.

Electricity is easy to take for granted in the U.S. until the lights go out. But there are parts of the world where electricity supply disruption sadly is a normal part of life, with all kinds of negative implications for health care, education, work, and safe homes.

While we shouldn’t settle, we also can be very grateful that power outages like what Texas is suffering through now aren’t more common, and leaders should be wary of policies that make energy less affordable and accessible.

For more detailed but layman explanations of the unique particulars of Texas’ grid facing a weather situation like this, check out these sources:

—Joshua Rhodes from the University of Texas’ Energy Institute for on-the-ground updates and answers.

—Christopher Knittel at the Massachusetts Institute of Technology for the differences between the “energy only” market in Texas and other models, such as those that use capacity markets or rely on monopoly utilities.

Katie Tubb is a policy analyst for the Thomas A. Roe Institute for Economic Policy Studies at The Heritage Foundation.