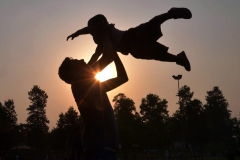 When it comes to parental rights in the public schools, parents from diverse faith backgrounds are deeply concerned that gender identity policies are excluding them from sensitive decisions involving their own children.

Recently, First Liberty Institute filed a friend-of-the-court brief in John and Jane Parents 1 v. Montgomery County Board of Education, on behalf of four nonprofit organizations: the Jewish Coalition for Religious Liberty, the Coalition for Jewish Values, the American Hindu Coalition, and the Islam and Religious Freedom Action Team.  In this important parental rights case, the U.S. Court of Appeals for the Fourth Circuit will decide whether a public school policy excluding parents from any knowledge about their children’s decisions about gender identity violates the Constitution.

On November 10, the same coalition also filed a friend-of-the-court brief at the Eighth Circuit in a similar case out of Iowa.

Montgomery County (MD) Board of Education’s “Gender Identity Guidelines” give staff and students total control over sensitive decisions about a child’s gender identity and pronouns at the exclusion of parents, even allowing children to transition at school without their parents’ knowledge or consent.

The policy requires staff to rank a parent’s perceived “support level” using a subjective scale of 1 to 10. This all-important decision of whether to involve—or even notify—the parents that their child is seeking a gender transition must be made without speaking with the parents. This policy requires government officials to evaluate parents’ moral and religious beliefs, with a clear danger of making unfair assumptions based on the family’s religious beliefs.

The diverse group of religious organizations argues that parental exclusion policies violate the First Amendment rights of parents and families. The Free Exercise Clause of the First Amendment provides robust protection for religious parents to direct the education and upbringing of their children. The right of parents to share their faith and values with their children is at the core of religious liberty.

The Supreme Court has protected the fundamental relationship between parents and their children for nearly 100 years. In a 1972 case called Wisconsin v. Yoder, the Court ruled that Amish parents were not required to send their children to public high school. The Court recognized a long tradition of protecting fundamental parental rights dating back to the 1920s, and it made clear that parental rights regarding religious upbringing have always been “specifically protected by the Free Exercise Clause,” long before public school was required.

Policies like Montgomery County’s also disproportionately harm families from minority faith backgrounds. Jewish parents fulfilling their religious obligation to teach their children Torah values will be left in the dark as their children are forced to choose between following the beliefs they learned at home or succumbing to pressure from school officials and classmates to support gender transitions. And Hindu parents, who have no viable choice but to send their children to public school, will be the last to learn that their student has secretly transitioned at school at the encouragement of administrators.

Children growing up in minority religious traditions face the greatest pressure to conform to the values and beliefs endorsed by school administrators. A Muslim student wearing a hijab or a Jewish student wearing a yarmulke would experience additional pressure because their very appearance demonstrates sincere religious beliefs that school administrators will assume conflict with Montgomery County’s policy. And the policy focuses exclusively on making safe spaces for LGBTQ students without any consideration of religious students with a conscientious objection to sharing a restroom or locker room with the opposite biological sex.

For Christian, Muslim, Jewish, Hindu, and many other religious students, pressure from school staff will cause confusion and conflict with the religious beliefs they are learning at home. For a Muslim student who wears a hijab and lives according to the Quran, her sincere religious beliefs prevent her from sharing intimate spaces with biological males. Surely reasonable compromises can be made where all students—including religious students and students who identify as LGBTQ—feel safe and accepted. But Montgomery County’s policy does no such thing.

For families in school districts around the country adopting similar policies, such concerns are increasing. But the courts can address these parents’ concerns by vigorously enforcing their First Amendment rights. Until they do, this interfaith coalition will continue urging the courts to uphold free exercise rights and consider the impact of such policies on religious families nationwide.