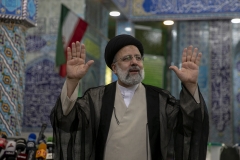 This week, the Iranian theocracy's president, Ebrahim Raisi, gave a brazen virtual "speech" at the United Nations General Assembly. His barefaced lies and shameless claims once again raised the question, why is the UN allowing a madman and a mass murderer to take over the international podium? Which world leader is truly willing and ready to shake Raisi's blood-drenched hands?

As a former U.S. Ambassador to the U.N. Human Rights Committee, I am appalled that Raisi was given a platform at the General Assembly. Indeed, he should be investigated and promptly prosecuted for committing horrendous human rights abuses, not allowed to spew intolerable and hateful rhetoric at a major international forum.

True to form, Raisi fully exploited the undeserved spotlight and claimed that the U.S. sanctions against his genocidal regime amounted to "crimes against humanity."

Since Raisi's rise to the presidency in the summer, there have been numerous calls by human rights organizations and authorities to hold him accountable specifically for the crimes he committed in 1988. It is well-known and documented that in that year, Raisi was a member of the "Death Committees" that carried out the orders of the former Supreme Leader Ruhollah Khomeini to annihilate all imprisoned opponents.

The massacre was horrendous in its barbarity and scope. It is estimated that more than 30,000 were summarily executed after minutes-long show trials. The victims were then buried in unmarked secret mass graves across Iran. The regime has done its utmost in subsequent years to hide the location of those graves or to erase all traces of its massive crime by destroying them. Sadly, families are still forbidden to hold memorials for their loved ones. They have been seeking justice for more than 33 years.

The overwhelming majority of the victims were members and sympathizers of the main democratic opposition Mujahedin-e Khalq (MEK). The MEK believes in a tolerant and democratic Islam that respects human rights and democracy, an interpretation that predictably contradicted the perverse and rigid fundamentalist ideology harbored by the ruling mullahs. So, in 1988, the mullahs' "caliph" or supreme leader, Khomeini, issued a hand-written fatwa ordering their execution based solely on their beliefs.

That is why human rights experts like Geoffrey Robertson, the former president of the U.N. Special Court for Sierra Leone, have described the 1988 massacre as a genocide. Speaking at a conference in August, Mr. Robertson noted: "It seems to me that there is very strong evidence that this was a genocide. It applies to killing or torturing a certain group for their religious beliefs."

Amnesty International’s current secretary general, Agnès Callamard, correctly noted after Raisi's installment as president in 2021: "That Ebrahim Raisi has risen to the presidency instead of being investigated for the crimes against humanity of murder, enforced disappearance and torture, is a grim reminder that impunity reigns supreme in Iran."

Indeed, top U.N. human rights authorities, including the U.N. investigator on human rights in Iran, Javaid Rehman, have called for an international inquiry into the 1988 massacre. Mr. Rehman said in an interview with Reuters this year: "I think it is time and it's very important now that Mr. Raisi is the president that we start investigating what happened in 1988 and the role of individuals."

Those calls have fallen on deaf ears it seems, with devastating consequences. The lack of international investigations into Raisi's role in the murder of thousands of political prisoners has emboldened the regime to become more aggressive and commit further atrocities against the Iranian people. When Raisi was the judiciary chief in 2019, in November of that year, at least 1,500 protesters were killed in the streets and thousands more imprisoned and tortured based on his orders.

The inaction and disturbing silence of the U.N. with respect to Raisi's horrendous crimes are immoral, disgraceful, and inexcusable. They set a precedent when it comes to other autocrats.

As I have stated on this page before, democracies should take the lead and launch a formal international investigation into the 1988 massacre in Iran. And the U.N. must heed its experts' calls and do its part to ensure that genocidal criminals are deprived of impunity. It can start by joining the international movement that is demanding Raisi's prompt prosecution.