Earth to the DOJ: Get Your Priorities Straight 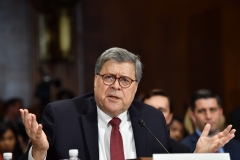 What on earth is the DOJ thinking?

The Justice Department’s job is to – you guessed it – ensure that justice is brought forth for the American people. And in this crazy year known as 2020, it certainly has a lot on its plate. From taking on the crony companies committing PPP fraud and cracking down on looting and vandalism throughout our cities to examining Big Tech’s abuse of free speech, the American people are in desperate need of the DOJ’s helping hand in a multitude of areas. But instead of devoting its full, undivided attention to these critical issues, some in Attorney General William Barr’s department are instead busy carrying the anti-Trump music industry’s water.

On Tuesday and Wednesday, the DOJ plans to hold a virtual public workshop that will provide a venue for ASCAP and BMI – the two behemoths that license approximately 90 percent of all music to businesses – to discuss their government honey-do list.

If you’re sitting at home scratching your head or rubbing your glasses in wonder at why the DOJ would do something like this, you’re not alone. Yes, these are the same two organizations that have warned President Trump or threatened him with a lawsuit for playing the music they license at his rallies. Yes, the recorded music and music production sector has historically been vehemently against this administration. It provided nearly 19 times more in political donations to Hillary Clinton’s campaign and much of the music industry embarrassed the president by refusing to perform at his inauguration. But despite this clear hostility towards the current White House, and irrespective of everything else competing for its attention, it’s the music giants of all people and things that the Justice Department is worried about today.

What’s so important for the government to consider for ASCAP and BMI during this time of great upheaval? The “wisdom” of relaxing the existing consumer protections imposed on them, of course. That way, the music elites that these titans represent can profit even more from government regulations to the detriment of consumers and businesses. What a great use of everyone’s time!

The issue at hand boils down to consent decrees – settlement agreements with the Justice Department that have restrained ASCAP and BMI price-rigging since the 1940s. Back then, the DOJ recognized that it couldn’t trust these predatory behemoths – which individual music publishers created by banding together to fix prices – to behave in the marketplace by themselves. And so, the DOJ had them sign these antitrust agreements, which stop ASCAP and BMI from charging businesses inequitable rates for the licensing rights they need.

Thanks to these consent decrees, every business can now easily purchase a single license that encompasses all of the songs in ASCAP and BMI’s catalogs for a flat fee every year. They don’t have to deal with the accounting nightmare of negotiating with every license holder of each song; they don’t have to worry about ASCAP and BMI trying to wrangle more than what could be charged in a free marketplace. American companies now just pay a reasonable bill to these two organizations, without fear of enterprise-threatening copyright infringement suits, case closed. Painless and simple!

At least that’s how it’s worked for the last 70 years. Like all good giant companies, ASCAP and BMI are not content with the status quo. They now want the government to modify this system for them so they can extract more money that they neither need nor deserve from businesses.

This duo, which recently broke annual revenue records exceeding $1 billion apiece, claims that the consent decrees – at least in their current forms – have outlived their usefulness.

But the facts don’t substantiate their assertions.

Not only do ASCAP and BMI continue to possess the same power as they did in the 1940s, but they also remain just as reckless as they did back then. In fact, ASCAP recently made a hefty settlement payment to the DOJ well exceeding $1 million to settle allegations that it violated the consumer protections in its consent decree.

It’s remarkable that ASCAP would have the gall to ask the Justice Department for favors when it doesn't even seem to have any respect for the DOJ’s rules in the first place. But what’s even more amazing is that the DOJ is actually entertaining ASCAP and BMI's requests now, especially at this time and under these conditions!

President Trump never gives into The Resistance so easily, and neither should the rest of his cabinet. It’s incumbent upon AG Barr to get his staff in order and ensure they are spending their time on upholding law and order, not destroying it. The integrity of the entire institution is at stake.

Kevin Mooney is an investigative reporter for The Daily Signal.