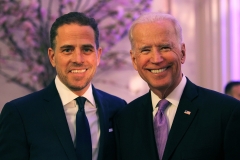 So much for that fair election nonsense we’re taught in school. The social media companies don’t want that to happen. And they have no hesitation to do what they have to do to ensure their candidate wins.

If you have any doubts about that, Facebook just apparently declared for Team Biden.

The world's No. 1 social media site decided that news embarrassing to Democrats must be restricted.

Wednesday, the New York Post published a groundbreaking story implicating former Democratic presidential candidate Joe Biden in Ukrainian corruption. “Hunter Biden introduced his father, then-Vice President Joe Biden, to a top executive at a Ukrainian energy firm less than a year before the elder Biden pressured government officials in Ukraine into firing a prosecutor who was investigating the company, according to emails obtained by The Post,” wrote the paper.