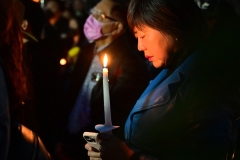 The mainstream media once again displayed its glaring bias after the horrific Lunar New Year murders in Monterey Park. But  sloppy journalism and loose relationships with facts added on to the embarrassment, not only for them but for left wing politicians.

While Chinese New Year was supposed to be a happy time, it turned into a bloodbath at a dance studio when a mass murderer, now revealed to also be of Asian descent, opened fire, killed 11 and wounded about ten more in Monterey Park. The perpetrator left in a white van to attempt to do the same at another dance studio in neighboring city Alhambra.

Fortunately he was thwarted by a 26 year old hero who had enough gun training to prevent an encore of what just happened in Monterey Park.

Some underplayed takeaways I want to explore that will never be covered by the mainstream media include the following:

Let’s recognize the hero, Brandon Tsay, who thwarted the mass murderer and another bloodbath in Alhambra.

Brandon Tsay was the 26 year old hero who lunged at the gunman and saved the lives of countless citizens in Alhambra and beyond.

The untold story is a rich subculture of Asian American males who are huge supporters of our second amendment rights, that have dedicated their spare time to an extracurricular craft that has a practical impact: protecting themselves, their families and their communities against a constant flow of crime, from property to assault, that stretches back decades, from when local impoverished demographics target Asian Americans for their perceived wealth.

This was occurring way before “Stop Asian Hate” which was cynically used by left wing politicians to paint a false narrative of white supremacy when most of the crime was coming from black Americans, a gross distortion of reality and true crime statistics.

We spend so much in mental health $. Where’s it going?

As inconvenient truths surfaced, the media clumsily pivoted over to talking about mental health. While LA has the most restrictive gun laws, it is not shocking that full blown attempts to make it about guns would be muted by the facts around this incident.

But let’s talk about mental health, shall we? Mental health is one of our most taxpayer funded sectors. In fact, my Facebook feed and email inbox were flooded with nonprofit organizations and psychologists offering their services for trauma counseling. But do we ever assess the ROI of these efforts?

The bottom line for Asian Americans: despite being an affluent model minority, lots of mental illness still exists through gambling addictions, domestic violence, cultural differences in assimilation among many more. These Asian specific conditions are ignored for a liberal-white-centric focus on therapy.

Most importantly, overall efforts seem to fall flat when we see how much is spent and the homelessness problem still exists and is growing. Looks like the homeless industrial complex is on a gravy train with its grift on overtime.

The media and the new woke LA sheriff is calling this an “assault pistol” reveals its bias and is simply laughable.

In an LA Times article, the new Sheriff Luna, of Long Beach Black Lives Matter fame, when he allowed the city to burn by telling his police force to stand down, called a regular gun an “assault pistol”. While the gun itself had some upgrades, the use of this rhetoric reveals his bias and focus on the weapon as something to be vilified versus exploring the mental illness issues or security around these huge events (once again Asians are ignored when it comes to public safety issues - this may not have happened under his predecessor Sheriff Alex Villanueva, who ensured he always had sheriff and deputy presence at LA’s biggest events).

“Stop Asian Hate” is played out and politicians remain out of touch by constantly evoking this, with or without evidence.

New mayor Karen Bass’ statement after the attacks was misguided and foolish. It shows that her worldview is very narrow and jumping to that conclusion, similar to Barack Obama back in the day, is just a sad and ugly perpetuation of victimhood. “Stop Asian Hate” was important for a time, to highlight the crimes against Asians. But now let’s focus on solutions.

I was shocked as I am a nobody but early in the investigation I already got info from my friends in the LA Sheriff department that the suspect was an elderly Asian man. Are you telling me no one communicated with the Mayor? Or was she just eager to shoot from the hip and make a statement to perpetuate a victimhood agenda? I expect a higher standard from our elected officials. I hope she can take the time to award a victor, Brandon Tsay, who thwarted further casualties and showed what it means to be Asian: solution oriented, not victim oriented.

To catch my discussion on One America News with my friend Dan Ball regarding the shootings, please follow the Rumble link.

Originally appeared in the Published Reporter.