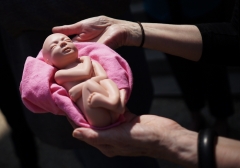 Dobbs poses the best opportunity in decades to revisit some of the court’s most contentious precedents and modernize U.S. abortion law, which currently allows unlimited abortion up to birth under Roe v. Wade and the all-encompassing definition of maternal health imposed by its companion case, Doe v. Bolton.

Mississippi Attorney General Lynn Fitch and her team are urging the court to reverse Roe and return this issue to legislatures, the proper realm for policymaking. Many observers believe the court would not have accepted this case unless a majority of justices were open to change.

We at Susan B. Anthony List hope the court will do precisely what Mississippi and a dozen other states request. However, any version of “yes” to the constitutional question will be a welcome shift away from an absolutist jurisprudence that places the United States among a tiny minority of nations – including notorious human rights violators China and North Korea – that allow elective late-term abortion more than halfway through pregnancy. An answer of “yes” to the question presented also would allow lawmakers to act on new information and their constituents’ will. The Texas Heartbeat Act exemplifies lawmakers’ frustration with the status quo and their determination to protect unborn children and mothers.

The abortion providers’ case relies heavily on stare decisis. Their brief asserts that not one but “two generations…have come to depend on the availability of legal abortion” – that essentially women have built their lives around abortion. These arguments are unpersuasive for several reasons.

First, Roe has been panned by scholars from the beginning, even by supporters of legalizing abortion. Justice Ruth Bader Ginsburg observed that Roe “provoked, not resolved, conflict.” When decisions prove hopelessly unworkable, doubling down is senseless.

Second, as Mississippi points out in rebuttal, the argument “boils down to the view that millions of women have a meaningful life only because 50 years ago seven men in Roe saved them from despair — and that women’s success comes at the cost of ending innumerable human lives.”

Susan B. Anthony List and the 79 pro-life women state legislators, representing 45 states, who joined our amicus brief beg to differ. At the time of Roe, women made up just 5.9 percent of state legislators; only 15 women served in Congress. Since then, the number of women serving in state legislatures has more than quintupled. Moreover, many of those gains occurred within the last 15 years. In 2020, a record 31 pro-life congresswomen were elected with the support of SBA List. All signs point toward continued growth. (Law professor Helen Alvaré et al. note that women’s representation in professional fields, as in public service, has increased at the same time as a prolonged decline in the U.S. abortion rate.)

A paternalistic approach is even less appropriate today than in 1973. Our brief concludes:

Third, the plaintiffs’ case relies on outdated science regarding fetal development. Citing a 2010 Royal College of Obstetricians and Gynaecologists report, they argue “conscious awareness, including the experience of pain…before viability is even less supportable today than it was at the time of Casey.” They fail to note that one of its co-authors, convinced by a growing body of evidence, renounced his former position and now believes fetal pain is possible as early as 12 weeks.

In their own amicus brief, Dr. Maureen Condic – an embryology professor – and the pro-life nonprofit Charlotte Lozier Institute detail 12 specific lines of new scientific evidence since 1973 that demonstrate the humanity of unborn children, including their capacity to feel pain well before “viability.” By 15 weeks, an unborn baby’s heart has beat nearly 16 million times. She prefers sucking her right or left thumb, and can already respond to taste, touch, and pain.

Justice Harry Blackmun wrote in Roe, “Viability is usually placed at about seven months (28 weeks) but may occur earlier, even at 24 weeks.” Modern technology has pushed this frontier further back. Guinness World Records recently announced that an Alabama boy named Curtis Means is the most premature baby to survive. Born at 21 weeks and one day of gestation, Curtis is a healthy 16-month-old. While such cases aren’t yet the norm, Curtis’ story prompted one politically independent commentator to remark, “medical science advancement poses a greater risk to the abortion status quo than any court decision.”

Finally, because its detractors have portrayed it as radical and unpopular, it is worth considering Mississippi’s law in the context of international norms and a groundswell of pro-life legislation in U.S. states. One analysis found that 47 out of 50 European nations limit elective abortion prior to 15 weeks. Among the American public, the court’s precedents have settled nothing. Eighty percent of Americans oppose abortion after the first trimester, which is diametrically at odds with what those precedents allow. This year alone, state lawmakers have enacted more than 100 new pro-life laws, more than any point in American history – and 2,700 pro-life pregnancy centers nationwide are prepared to offer women and families compassion and support.

The court need only step aside and let the democratic process work as it was meant. In the absence of Roe, the law will not default to an automatic national abortion ban; rather, all states will be free to debate, find consensus, and let the values of their people be reflected in the law without constant interference by unelected judges. This spirited contest is truly at the heart of the meaning of liberty in America – all parties should welcome it, and with it, the chance to save countless lives.

This article is part of a symposium on the argument in Dobbs v. Jackson Women’s Health Organization. A preview of the case is here.

Marjorie Dannenfelser is the president of the Susan B. Anthony List.