From Breast Cancer to Suicide Risk, We Will All Be Healthier When Roe Is Overturned 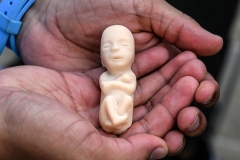 Dec. 1, 2021 was a remarkable day in America’s history, as the Supreme Court heard oral arguments in Dobbs v. Jackson Women’s Health Organization. The case involves the Gestational Age Act, a Mississippi law that protects the health of pregnant mothers, the dignity of unborn children, and the integrity of the medical profession by limiting abortions after 15 weeks in gestational age, permitting them only in medical emergencies or for severe fetal abnormality.

If the Supreme Court upholds Mississippi’s Gestational Age Act, it could overturn or upend Roe v. Wade, empowering states to pass laws that protect life and reflect the values of their citizens.

A healthy and thriving society recognizes, protects, and cares for its most vulnerable members. The World Health Organization (WHO) defines health as “a state of complete physical, mental, and social well-being and not merely the absence of disease or infirmity.” By that definition, we will all be healthier when Roe is overturned.

Every person matters. The death of a human life is never inconsequential, no matter the person’s size, age, or abilities. This reality is clearly evidenced by the testimonies of couples who have experienced a miscarriage. We are wired to know that human life is sacred. How then can we trivialize the intentional killing of a fully formed human being?

The truth is, abortion hurts. It hurts unborn children, mothers, fathers, families, and communities, and the ripples of brokenness are felt within society at large. Anecdotal evidence that abortion harms women is seen and heard every day as women share their stories of grief, pain, guilt, shame, depression, and hopelessness after experiencing abortion.

Nearly 630,000 abortions were reported to the CDC in 2019, and more than 60 million lives have been lost to abortion since that dark January day in 1973 when the Supreme Court created out of whole cloth a constitutional “right” to end the life of an unborn child. Since then, abortion advocates have adopted repeatable euphemisms to cover up the ugly and barbaric nature of the practice and attempt to convince women and the rest of society that abortion is normal, necessary, and even “safer than childbirth.”

Abortion recovery and healing ministries abound across the nation for a reason. In 2019, consumer research commissioned by Support After Abortion showed that women reported “feelings of regret, guilt, depression, anxiety, shame, paranoia, and so much more after their abortion.” The research further revealed that 90 percent of the women did not know where to get help with their reproductive loss and 83 percent said that anonymity was important when talking about their loss.

Unfortunately, much of the harm reported by women is indiscernible – if the only place you look is the most frequently quoted academic studies. One such study, the Turnaway study, is highly regarded by the American Psychological Association (APA), but characterized by practicing mental health experts as methodologically flawed and unduplicatable.

And then there is the established link to breast cancer. A 1996 study published by the National Center for Biotechnology Information (NCBI) recognized that, consistent with other previous studies over the period of half a century, induced abortion significantly increases the risk for breast cancer.

How about the broken relationships on the bloody trail of abortion? The practice severs the life-giving relationship between a mother and her unborn child and destroys bonds between mothers and fathers, husbands and wives, boyfriends and girlfriends, fiancés…and the list goes on. Can we honestly look away, pretending abortion doesn’t take a toll on our communities – on our society?

As someone born after Roe, I have often thought about all of the wonderful people, classmates, and friends who are missing because they were never given the chance to take their first breath or make the significant mark they were created to make. We may not see the “missing” in our society, but we know and feel the empty spaces they were supposed to fill.

In a society where nearly one in four women are said to have an abortion by age 45, the overall trauma takes a toll, and it is worse when women suffer in silence because the loudest voices in society obscure the truth about the nature of their trauma.

The path to healing begins with honesty and adherence to the truth, from the highest court to the streets. Jesus taught us that the truth will set us free. Thankfully, technological and scientific advancement since 1973 have cast much-needed light on what happens in the womb. This same light should guide the Supreme Court to overturn Roe and return the issue to state legislatures, where it belongs.

Overturning Roe opens the door for hope, diversifies the platforms for truth-telling, and promotes honesty in our debates about abortion. All of these are necessary ingredients for a healthier society.

Mark Lippelmann is senior counsel with the Center for Life at Alliance Defending Freedom (@ADFLegal).