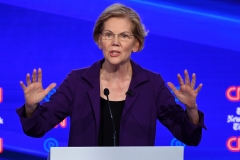 When congressional leaders rolled out the 2,700-page, $1.5 trillion omnibus spending bill Wednesday, they made sure to lard it up with plenty of pork.

Such so-called earmarks were banned by conservatives a decade ago after high-profile cases of corruption were exposed, sending Members of Congress and lobbyists to prison, and after clear examples of waste were uncovered, such as the infamous “bridge to nowhere.”

Tucked away in the Explanatory Statements accompanying the legislation are thousands of special interest funding provisions inserted at the request of Members of Congress. A list of all the earmarks attached to the bill spans 367 pages by itself.

Unsurprisingly, some of these earmarks advance leftist woke ideology.

Here are six examples of woke earmarks included in the omnibus spending bill:

Massachusetts Sens. Elizabeth Warren and Ed Markey secured $995,000 for “Grid Resilience and Equity in the Energy Transition” research at the University of Massachusetts. Notice the word “equity” in the title. That means the left is going to redistribute taxpayer dollars to fix some perceived racist inequality in the energy system.

This taxpayer funding will be used to promote a “fast and fair transition to a decarbonized energy system in the United States” by the Energy Transition Institute and a local utility company. The faculty director of this institute stated, “The current energy system is inequitable, not just overseas but here in the U.S. The energy system is racist.”

Ohio Sen. Sherrod Brown secured $500,000 for the National Underground Railroad Freedom Center, a museum in Cincinnati dedicated to telling the stories of the Underground Railroad and the journey to freedom from the horrors of slavery. This history is vital to understanding our past so that we can create a better future, striving towards realizing those self-evident truths described in our Declaration of Independence that all men are created equal.

Unfortunately, the National Underground Railroad Freedom Center continues to engage in modern left-wing politics. The center has lobbied in favor of the controversial H.R. 4, the John Lewis Voting Rights Act, which would give unelected federal bureaucrats the power to veto state election laws, overriding the choices of voters and legislators.

The center also lobbies against legislation that would ban the teaching of the racist and divisive tenets of critical race theory to grade schoolers in Ohio, calling systemic racism a “foundation of our nation since 1619.”

The Hockessin Colored School #107 played a historic role in the landmark Brown v. Board of Education case that ended segregation in schools. Now, more than 60 years after the school closed its doors, The Friends of Hockessin Colored School #107, Inc. are receiving $750,000 in federal taxpayer funds at the request of Delaware Sens. Chris Coons and Tom Carper to transform the property "into a center for diversity, inclusion, and social equity.”

According to the group, the center would be used to host DEI workshops on controversial topics such as “ethnicities,” “gender identity and genetics,” “public safety and social justice,” and “social determinants of health.”

New York Rep. Jamaal Bowman was able to get $496,000 in the name of “health equity” for “pool improvements” in his home district. According to Bowman, these are “essential capital improvements” to YMCA pools. He cited evidence showing that African Americans and Hispanic children have lower abilities to swim than other groups.

Bowman does not justify on his website why $496,000 is needed for just the YMCA of Yonkers but instead simply justifies this spending by saying, “This project is essential for minimizing disparities in access to swimming lessons and aerobics, promoting health equity.”

Massachusetts’ Markey and Warren were also able to combine two left-wing priorities into their $500,000 earmark for Worcester State University to increase diversity and inclusion for STEM students to study climate change. According to Warren, “This project would increase access and success for under-represented incoming college students.”

It is unclear why shellfish aquaculture in Rhode Island needs to be woke. The amount provided in the final omnibus is actually more than three times the amount originally requested by Whitehouse.

All of these earmarks were airdropped into the final spending bill with little transparency and without thorough vetting.

Furthermore, none of these earmarks have anything to do with carrying out the proper, limited roles of the federal government enumerated in the Constitution. This is just further proof that special interest spending on local projects is in no way a valid tool for promoting Congress’s important Article I power of the purse.

Instead of this costly spending bill loaded up with pork projects, Congress should reinstate the earmark ban and focus on using its spending power appropriately to fund the constitutional needs of the whole country while cutting wasteful and unnecessary spending and allowing Americans to keep more of what they earn.

Matthew Dickerson is director of the Heritage Foundation's Grover M. Hermann Center for the Federal Budget.

The author thanks Joshua Loucks of the Heritage Foundation's Young Leaders Program for research assistance on this article.