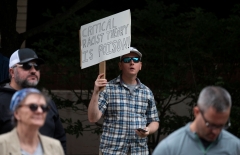 Any parent who has watched or testified before a school board meeting understands how challenging it is to be heard and how often the work of the board bears little resemblance to the will of the people. Even with sympathetic elected officers, engaging the educational industrial complex is hard work. And recent action by the U.S. Department of Justice (DOJ) is making the job even harder.

On Monday, the DOJ announced an effort to determine if "a disturbing spike in harassment, intimidation, and threats of violence" against school personnel requires federal intervention by law enforcement. Citing no specific examples of such threats, Attorney General Merrick Garland explained:

"I am directing the Federal Bureau of Investigation, working with each United States Attorney, to convene meetings with federal, state, local, Tribal, and territorial leaders in each federal judicial district within 30 days of the issuance of this memorandum. These meetings will facilitate the discussion of strategies for addressing threats against school administrators, board members, teachers, and staff, and will open dedicated lines of communication for threat reporting, assessment, and response."

Family Research Council condemns violence. Parents who have tried in good faith to work with elected officials to remove pornographic books from school libraries or to expose injustices in programs for children with disabilities are often harassed and demeaned, banned from meetings, or silenced. This latest insult from the DOJ, at the behest of the National School Boards Association (NSBA), is dangerous and authoritarian.

In a ridiculous complaint to President Joe Biden, NSBA executives invoked the Patriot Act as they effectively charged parents and citizens who are advocating on behalf of children with "domestic terrorism." They asked for federal law enforcement protection from parents and citizens -- their own voters.

On "Washington Watch," Rep. Mike Johnson (R-LA) had this advice for parents and citizens who want to speak out:

"I hope they're not intimidated. We want to encourage them to go and speak up. It's never been more important than it is right now....You and I and others have been for years trying to work to engage people of faith, concerned parents to go and go to meetings like their local school board to have their say. We encourage people to audit the local curricula of what their kids are learning in school. We encourage them to share that with people in their churches, in their community, and to be an engaged and active part of these decisions because it governs the life of your own child and everyone in your community. And now you have the federal government...big power now telling you to stay home, sit down, and be quiet. We should not. We should resist that."

"When we talk to community members, people of faith about getting engaged, there's a way to do that. There's no place for violence. We don't have to even raise our voices. But to be calm, be reasonable, explain your position and get others who agree with you to do the same. And you'll find that the vast majority of this country still agrees with us. They still believe in common sense. They do not want their children to be indoctrinated in public schools and now is the time to speak up. We have to be engaged in the next election cycle, of course, to change who is the ruling class in Washington. And we've got to [be engaged] at the local level.

Parents are met at the schoolhouse door by self-proclaimed "experts" who promise to educate our children. When these same experts become guardians and gatekeepers, building a system immune to the influence of parents or public pressure, children's education and wellbeing suffer. We must never forget that parents are footing the bill for all the obstacles standing between them and their children in public schools.

Christians and conservatives must engage in our educational system. Our voices are important and make a difference. If they didn't make a difference, then Attorney General Garland and President Biden wouldn't feel the need to ban, demean, and belittle the legitimate forces that challenge their power -- the parents and citizens who speak out.

To become more engaged, attend your next school board meeting. Even if you do not speak publicly, your presence there is of utmost importance. Parents Defending Education has a petition opposing this latest attempt to intimidate parents. At FRC (Family Research Council) Action, we have our School Board Boot Camp and Freedom of Information Act (FOIA) webinar to help empower parents to engage in public education. Download our latest publication, "A Concerned Citizens' Guide to Engaging with Public Schools," for information and resources.

Meg Kilgannon is an education research associate at the Family Research Council, served as executive director of Concerned Parents and Educators of Farifax County, was a FertilityCare practitioner, and is a mother of four children.