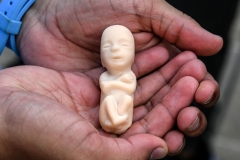 Many thought that the presence of Trump appointees Neil Gorsuch and Brett Kavanaugh on the U.S. Supreme Court would create a durable majority that would uphold both abortion facility regulations and incremental pro-life laws.  However, in this case, Chief Justice John Roberts sided with the liberals on the Supreme Court, resulting in the necessary five votes to strike down the Louisiana law.

Like the Louisiana regulations, the Texas clinic regulations included a provision that abortion doctors have admitting privileges at a hospital less than 30 miles away from the facility where they were performing abortions. The Texas admitting privileges requirement took effect in November 2013 and largely stayed in effect until the Supreme Court’s decision in 2016. NBC News reports that between 2013 and 2016, the number of abortion facilities in Texas fell from 42 to 19.

There is certainly disagreement about how the closure of these Texas abortion facilities would impact the constitutionality of the abortion regulations that were enacted in the Lone Star State. However, since part of the Texas regulations actually took effect for an extended amount of time, there was actual evidence of the law’s impact in Texas. Conversely, the Louisiana clinic regulations were never in effect for a significant amount of time. As such, the Supreme Court justices ruling on the case were basing their decision on speculation – not evidence.

The media coverage of the decision indicated that several doctors who perform abortions in Louisiana would be unable to obtain hospital admitting privileges. However, a closer look at the trial record indicates that this may not be the case. The trial record indicates there are five doctors who perform abortions at the three abortion clinics in Louisiana. In his dissent, Justice Alito nicely describes how some of these physicians only made "perfunctory efforts" to get admitting privileges at nearby hospitals.

Many media outlets indicated that these clinic regulations offered little in the way of tangible health benefits. However, Justice Gorsuch’s dissent provides evidence that clinic regulations can improve public health.  He states that Louisiana’s abortion facilities “historically have done little to ensure provider competence.” Specifically he says that abortion facilities have failed to perform background checks on doctors and have “even hired physicians whose specialties were unrelated to abortion.” He also argued “the loss of admitting privileges" "might signal a problem meriting further investigation.” Gorsuch cited a situation where one abortion doctor lost admitting privileges after a patient’s death and the state licensing board placed limits on his practice.

Gorsuch also cited testimony that was presented during the legislative hearings on these clinic regulations. The hearings revealed that Louisiana abortion facilities were cited for numerous ethical and safety infractions in recent years.  Additionally, the legislative hearings also found a number of instances of misconduct. There was one situation where a woman was dismissed from an abortion facility while hemorrhaging. This woman eventually went to a hospital where an emergency room physician had to remove fetal body parts the abortion doctor left behind. Additionally, there were two separate situations where botched abortions in Louisiana abortion facilities resulted in emergency hysterectomies.

Overall, relatively few people read Supreme Court opinions. Most citizens are largely dependent on the mainstream media to both report on and explain Supreme Court rulings.   In this particular case, most media outlets provided scant coverage or analysis of the dissenting opinions written by Clarence Thomas, Neil Gorsuch, Samuel Alito, and Brett Kavanaugh. These dissents contained not only good insights about abortion jurisprudence, but also useful facts that distinguished this case from Whole Woman’s Health v. Hellerstedt. Gorsuch’s dissent, in particular, provided some very valuable information about abortion facility misconduct in Louisiana.

Overall, it is disappointing, but unsurprising that the mainstream media chose to ignore this.

Michael J. New is a visiting assistant professor at the Busch School of Business at The Catholic University of America and an associate scholar at the Charlotte Lozier Institute. Follow him on Twitter @Michael_J_New.