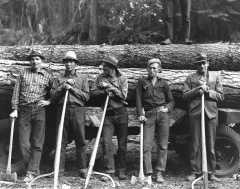 According to the Bureau of Labor Statistics (BLS), the national unemployment rate in April was 14.7%, a rate not seen since the Great Depression era of the 1930s under President Franklin Delano Roosevelt.

The U.S. unemployment rate from April 1929 to June 1942. Franklin Delano Roosevelt was president from March 1933 until his death in office in April 1945.

Also, when asked if the U.S. unemployment rate could hit 20% or 25%, Federal Reserve Chairman Jerome Powell said, “I think there’re a range of perspectives. But those numbers sound about right for what the peak may be.”

In other words, the U.S. unemployment rate already is at Great Depression-era levels. The numbers today have not been seen since the 1930s.

And, as the data from the National Bureau of Economic Research show, the United States did not really emerge from the Depression until the spring of 1941. By December 1941, when the Japanese attacked Pearl Harbor, the U.S. unemployment rate was down to 3.58%.

By June 1942, with the United States fully engaged in World War II, the unemployment rate was down to 0.24%.

The unemployment rate in the Great Depression really started to trend up in October 1930, when it hit 9.01%.

American President Franklin Delano Roosevelt (1882 - 1945) (left) lights a cigarette as he speaks with Soviet General Secretary Joseph Stalin (1878 - 1953) during a break in a photo-op session at the Yalta Conference held at the Livadia Palace, Livadiya (near Yalta), Soviet Union (later Ukraine), February 1945. (Photo by PhotoQuest/Getty Images)