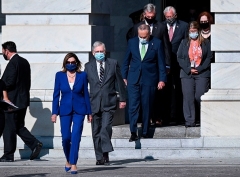 This country is not governed by a "Republican Party" and a "Democratic Party." It is governed by an establishment "uniparty" that betrays our citizens at every turn. Exhibit A: The joint annual ritual of fiscal vulgarity known as the omnibus spending bill.

While Americans are distracted with the holidays, Beltway crapweasels stuff their legislative Christmas trees with multibillion-dollar goodies for every special interest except the American people. I've reported with depressing regularity over the past quarter-century on how these pork-laden monstrosities get rammed through Congress, unread, with little scrutiny or outrage. But finally, light bulbs are going off.

The juxtaposition of measly COVID-19 relief for U.S. citizens against the backdrop of lavish aid for illegal immigrants, the military-industrial complex, Big Pharma, overseas social justice warriors, nongovernmental organizations and foreign countries is just too brazen to ignore. Americans will receive $600 COVID-19 relief checks and $300 unemployment payments as part of the consolidated federal government funding package. The $900 billion in COVID-related aid is folded into the massive, 5,600-page legislation encompassing 12 fiscal 2021 spending bills worth $1.4 trillion.

The puny pandemic stimulus for we the people is a pittance compared with these giveaways buried in the abominable "America last" porkulus:

—15.4 million illegal immigrant family members are now eligible for stimulus checks and can also now receive retroactive payments worth up to $1,800.

—The amnesty program for thousands of Liberians who've lived and worked here unlawfully since 2014 has been extended for another year.

—Untold numbers of illegal immigrants who claim to live with "unaccompanied minors" smuggled across the border will now enjoy a new shield from deportation.

—While funding support for the detention and removal of illegal immigrants by the Immigration and Customs Enforcement agency has been slashed by $431 million, open borders nonprofits are rejoicing over new funding for catch-and-release pilot programs that will keep deportable illegal immigrants out of federal custody.

—$500 million to Belize, Costa Rica, El Salvador, Guatemala, Honduras, Nicaragua and Panama to "address key factors that contribute to the migration of unaccompanied, undocumented minors to the United States."

—$461 million to Colombia for drug control and "human rights" programs.

—$33 million "for democracy programs for Venezuela.

—$1.65 billion to Jordan for "foreign military financing" and other assistance.

—$700 million in economic aid to Sudan for "global health" and "transition."

—At least $25 million for "democracy" and "gender programs" in Pakistan.

—"Not less than" $135 million for drug control and law enforcement assistance in Burma.

—$130 million to Nepal for "development" and "democracy" programs.

—$1.3 billion to Egypt for "economic support" and "higher education."

—$15 million to refurbish a patrol boat in Sri Lanka.

—$200 to Bangladesh, including $23.5 million to support Burmese refugees and $23.3 million for "democracy programs."

—"Not less than" $1.5 billion for implementation of Indo-Pacific Strategy and the Asia Reassurance Initiative.

This half-billion-dollar gift to Israel, one of the world's wealthiest nations with universal health care and highly subsidized higher education, comes on top of the $3.8 billion in foreign aid already allocated to the country this month through the National Defense Authorization Act — which also included $3.3 billion for security assistance, $500 million for missile defense, $47.5 million for "anti-tunnel technology" and $25 million for anti-drone aerial systems thousands of miles away to protect them. Not us.

Americans who dare ask these questions are viciously attacked by the uniparty gatekeepers and globalist water-carriers as "xenophobic," "racist" and "anti-Semitic." We've had enough. A manufactured public health crisis, post-George Floyd anarchotyranny, and the wholesale hijacking of our election system are pushing citizens to the brink of revolt.

In such times, and at all times, any self-respecting sovereign nation must put its people first. If you don't demand leaders who represent your interests, you deserve the serial abusers you elect, embolden and empower.