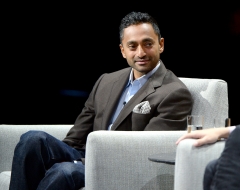 I am, however, mildly (but not surprisingly) annoyed that this blundering billionaire backed down so quickly in the face of exactly the kind of virtue-signaling bloviators whom he so rightfully criticized in the first place.

Chamath Palihapitiya, who is apparently a former AOL and Facebook executive and founder of a Palo Alto investment firm called Social Capital, outraged the perpetually outraged mob by dismissing his co-host Jason Calacanis' praise for the Biden Administration's "very strong" support of Muslim Uyghurs in China.

Palihapitiya retorted that "Nobody cares about what's happening to the Uyghurs, OK? You bring it up because you really care, and I think it's nice that you care; the rest of us don't care. I'm just telling you...a very hard, ugly truth. Of all the things I care about, yes, it is below my line." Palihapitiya then listed his own priority list of Official Things One Should Care More About, including "climate change" and America's "health care infrastructure."

Social media scolds and busybodies went ape-shizzle over Palihapitiya's comments. The Golden Warriors basketball team, of which Palihapitiya is a 2 percent owner, disavowed him. One woke NBA player blamed him for being a genocide facilitator. GOP Sen. Tom Cotton demanded that the Warriors "force" Palihapitiya to "sell his interest" in the team. Radio host Hugh Hewitt compared Palihapitiya to someone engaged in "Holocaust denial."

Take a deep breath, all you hyperventilating hyenas. Palihapitiya never "denied" anything. He simply said that at this time and place in history he couldn't get himself to care as much about the plight of the Uygurs (Uighurs, Uyghurs, whatever) as other things and other people. He also said something I've long emphasized as a matter of basic America First principles:

"Not until we can take care of ourselves will I prioritize them over us."

I also agree wholeheartedly with this: "So until we actually clean up our own house, the idea that we step outside our borders, with us morally virtue-signaling about someone else's human rights record, is deplorable."

Parents have been dragged off planes and out of school board meetings for defending their children's right to breathe.

Hundreds of thousands of workers have lost their jobs for refusing to submit to experimental COVID-19 jabs and junk-science testing.

Trump supporters have rotted away in solitary confinement over their attendance at the Jan. 6 election integrity rally in the Capitol.

— A 24-year-old UCLA grad student was stabbed to death by a black assailant in broad daylight at a high-end furniture store.

— A 40-year-old Asian woman was pushed off a subway platform to her death by a revolving-door black serial criminal in New York City, where skyrocketing black-on-white and black-on-Asian violence is covered up by bleeding-heart corruptocrats and their corporate media propagandists.

— A 70-year-old nurse was brutally murdered by a homeless sociopath in LA on her way to work.

No, I'm not apologetic now and never have been in the least for putting the health, safety, and welfare of Americans in America over the conditions of others outside our borders. Neither should Palihapitiya, but he has already folded like a set of accordian blinds.

"In re-listening to this week's podcast, I recognize that I come across as lacking empathy. I acknowledge that entirely. As a refugee, my family fled a country with its own set of human rights issues so this is something that is very much a part of my lived experience. To be clear, my belief is that human rights matter, whether in China, the United States, or elsewhere. Full stop."

Oh, stop quivering like a Jell-O pudding cup. Not everything and everyone can matter equally in a world of limited resources and energy. Sovereignty matters. Full stop.

You're a billionaire with nothing to lose, Mr. Moneybags. If you're going to be a truth-telling, politically incorrect maverick who goes "All In" (the name of Palihapitiya's podcast show), don't end up groveling pitifully on your knees, for heaven's sake.

Take it from the little brown woman with a big mouth who has gone all in for three decades in the public square: Man up, own your words and thoughts, and never back down when the bellowers bellow for your head.