Michelle Malkin: Where in the World Is Smollett Hoax-Enabler Tina Tchen? 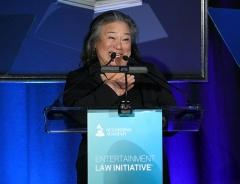 Jussie Smollett, the drug-addicted, anti-white, anti-Trump celebrity who cried wolf, was convicted last week on five out of six felony counts of disorderly conduct after falsely reporting to Chicago police that he was a victim of a hate crime attack in the sub-zero morning hours of Jan. 29, 2019.

Let us revel in the criminal comeuppance of a Hollywood liar. It's rarer than spotting a pair of MAGA redneck viewers of the liberal, anti-cop black TV drama, "Empire," at 2 a.m. in downtown Chicago. LOL.

Speaking of whom, here's a breaking news update in perpetuity: Smollett's two phantom conservative white assailants — who somehow recognized the C-list actor and somehow knew he was gay and somehow just happened to be carrying around a "noose" along with a hot sauce bottle filled with bleach — are still on the loose.

The fictional fugitives have gone the way of the "real" killer of Nicole Simpson and Ron Goldman, the racist gang rapists who assaulted Tawana Brawley and the white supremacist who hung that door pull — sorry, "noose" — in NASCAR driver Bubba Wallace's garage. It's getting rather crowded in the liberal theater of manufactured racism. I know. I've been documenting the twisted phenomenon for 30 years, since my days at the hate crime hoax-hotbed of Oberlin College.

But there's an important loose end, hanging limply like the rope around Smollett's neck, that deserves more scrutiny: Where in the world is the Obamas' Chicago fixer and Jussie fangirl Tina Tchen? Let me remind you of who this crony-state actor is.

Two months after Smollett and his bodybuilding bro buddies play-acted their fantasy attack, Chicago Sun-Times reporters discovered that deep-pocketed Obama campaign finance mega-bundler Tina Tchen had inserted herself in the investigation. Tchen texted Cook County State's Attorney Kim Foxx just three days after the incident "on behalf of Jussie Smollett and family who[m] I know" to express "concerns." She suggested that Foxx lean on Chicago Police Superintendent Eddie Johnson to yield to the FBI, and she shared an unidentified Smollett family member's cellphone number with Foxx.

Foxx texted back that she had done as requested and that Johnson was "going to make the ask." The unidentified relative rejoiced: "OMG this would be a huge victory."

As I reported at the time, the ties between Tchen and the Smollett family run deep:

— Tchen and Smollett's sister, Jurnee Smollett-Bell, joined together in March 2018 at South by Southwest in Austin to proclaim that "There Is No Time's Up Without Women Of Color."

— In May 2018, Tchen and Smollett-Bell took the stage together again— hand-in-hand, glued at the hip — at the United State of Women Summit in Los Angeles (where Tchen's former boss and gal pal, Michelle Obama, also appeared).

— Smollett-Bell and another sister, Jazz Smollett-Warwell, worked for the Obama campaigns in 2008 and 2012 and volunteered as tireless surrogates.

— My search of White House visitor logs shows Jurnee Smollett-Bell paying at least one personal visit to "POTUS/FLOTUS" at their residence in March 2013 while Tchen was serving as a top strategist to both Obamas.

Since I wrote "Culture of Corruption" in 2009, I've tracked Tchen's political maneuverings in the Democrat Deep State:

— Tchen personally shoveled more than $200,000 into the 2008 Obama presidential campaign coffers while a high-powered lawyer at white-shoe Skadden Arps.

— Tchen served as special assistant to President Obama and then took over as chief of staff in the East Wing for Mrs. Obama.

— Tchen was listed in 2009 White House visitor logs I reviewed as having met there with radical left-wing billionaire George Soros, and as Breitbart's Joel Pollak noted, Soros donated a total of $408,000 to super PACs supporting Foxx's successful primary and general campaigns for Cook County state attorney.

There's another set of related loose ends, too: How much did the Obamas know, and did they instigate Tchen's meddling in Smollett's folly? Remember: Michelle Obama hosted Jussie Smollett at a musical event at the White House in 2016 and danced with him on stage at a College Signing Day Event in 2018.

I consider them all unindicted co-conspirators in the Smollett Swindle. And they should pay.

Tchen has disappeared from public view since her fiasco with the #MeToo movement. She was forced to resign from the board in August after being exposed for running cover for former New York governor and accused sexual harasser Creepy Andrew Cuomo. I reached out to her for comment this week on the Smollett verdict and for her expert legal opinion as a high-powered lawyer on whether there are legal consequences for aiding and abetting a convicted hate crime hoaxer. No response.

I have a feeling I'll be waiting longer than O.J. Simpson's victims for an answer.