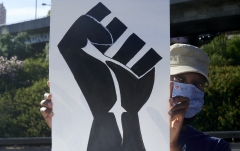 Featured is a poster with the Black Lives Matter fist at a protest. (Photo credit: Horacio Villalobos#Corbis/Getty Images)

You may not hear as much now about Black Lives Matter as you did in the fateful year of 2020, but rest assured, it is still deeply affecting key aspects of our lives today.

The divisive critical race theory conflicts flaring across the country are a legacy of BLM. So is the crime wave that blights our cities, as are the race-conscious policies that President Joe Biden is signing into law.

Not bad for organizations founded by Marxists who set out explicitly to dismantle the foundations of American society.

As I explain in my new book “BLM: The Making of a New Marxist Revolution,” published Tuesday, Alicia Garza, one of the main BLM founders, made her goals clear in Maine in 2019, when she told a group of eager New England leftists:

We’re talking about changing how we’ve organized this country, so that we actually can achieve the justice that we are fighting for. I believe we all have work to do to keep dismantling the organizing principle of this society, which creates inequities for everyone, even white people.

Ripping out the foundations of American society is exactly what those indoctrinating schoolchildren and putting American workers through reeducation sessions in their workplaces desire.

Schoolteachers now proudly and openly explain on social media that they bring critical race theory to the classroom to “challenge a broken system.” Meanwhile, beleaguered employees are having to resort to lawsuits to stop their companies from trying to reeducate them through critical race theory.

America proudly—and rightly—proclaims itself “the Land of the Free.” So, how did we get here? Black Lives Matter brought us here.

Critical race theory is the belief that America is systemically racist and oppressive, has been so since its founding, and that all racial disparities are the result of that. The only way to solve those problems is through reeducating Americans into those beliefs and through category-based redistribution, which will require discriminating legally against whites and men.

Not for nothing is Biden now signing into law bills that openly and explicitly discriminate against whites, the first time America has actively sought to deny one race or sex equal protection under the law since Jim Crow.

Critical race theory’s founders are Marxists like Garza, who also “question the very foundations of the liberal order, including equality theory.”

Critical race theory first emerged in law schools in the 1970s and 1980s, and it became dominant in the field of civil rights. It started to make some headway in K-12 classrooms in the 2010s, but it was slow to affect public policy.

That is, until 2020 happened. Black Lives Matter’s use of the video of George Floyd’s May 25, 2020 death to create the impression that those nine minutes defined America and its supposed systemic racism precipitated months of protests and hundreds of costly riots that stunned the country.

At the center of the mayhem sat the Black Lives Matter Global Network Foundation, the flagship organization. Traffic to its website surged massively as the protests got underway, spiking just seven days after Floyd’s death, when 1.9 million people flooded to the website, according to its 2020 Impact Report.

Not three days later, critical race theory trainer Robin DiAngelo was rushed into a conference call with no fewer than 184 members of Congress, all from the Democratic caucus.

“For all the white people listening right now, thinking I am not talking to you, I am looking directly in your eyes and saying, ‘It is you,’” the high priestess of critical race training intoned with a high sense of drama.

The BLM Global Network Foundation boasted in its 2020 Impact Report, which I quote in my book, that in the second half of 2020, its website was visited by more than 24 million people.

The open rate of those astonishing 127 million emails was an unheard-of 63%, whereas 25% is the average for nonprofits.

Unsurprisingly, Black Lives Matter activists were involved in 95% of the 633 incidents that Princeton’s Crisis Monitor identified as riots for which we know the identity of the participants, as I cite in my book.

It was “the costliest civil disorder in U.S. history,” according to the Insurance Information Institute, also quoted in the book.

Since then, as police have pulled back and rogue prosecutors refuse to put in prison criminals that are arrested, we have seen a shocking 35% spike in the murder rates in the 70 cities where one-fifth of Americans live.

So, Black Lives Matter at least has a good start on accomplishing Garza’s goal of “dismantling the organizing principle of society.” But what does it seek to put in its place?

Garza, Patrisse Cullors, and Opal Tometi, Black Lives Matter’s three main founders, have always been candid about their Marxism, which is a synonym for communism.

In 2015, Garza told SF Weekly that “social movements all over the world have used Marx and Lenin as a foundation to interrupt these systems that are really negatively impacting the majority of people.”

Also that year, she told a gathering of world communists, Left Forum, that it’s “not possible for a world to emerge where black lives matter if it’s under capitalism, and it’s not possible to abol­ish capitalism without a struggle against national oppression.”

As for Cullors, she has affirmed on the record several times that she’s a Marxist. In fact, with so many journalists denying that she is a communist, Cullors herself released a video on Dec. 14 stating clearly:

Am I a Marxist?…I do believe in Marxism. It’s a philosophy that I learned really early on in my organizing career….

…the U.S. is so good at propaganda and being like…it has sold the idea of the American dream, and that’s tied into capitalism and wealth. It’s much harder to sell communism….

In a June 2020 interview, Cullors said of Garza and herself: “We are trained Marxists. We are super-versed on, sort of, ideological theories.”

All of this is a matter of public record, easily available to all. Yet, journalists became invested in the social justice narrative of 2020, calling it “the year of racial reckoning” instead of reporting any of this.

They simply ignored the possibility that a group of self-avowed Marxists, which openly seeks to overturn society, made use of one man’s tragedy to lead disturbances, and boasted of it, and has so far largely succeeded in its goal.

That’s the reason I wrote the book.

Mike Gonzalez, a Heritage Foundation senior fellow, is a widely experienced commentator, international correspondent, and editor who has reported from Europe, Asia, and Latin America. He served in the George W. Bush administration, at the Securities and Exchange Commission and afterwards at the State Department, and is author of the book "BLM: The Making of a New Marxist Revolution." Read his research.