Target Is Selling Chest Binders to Girls Who Want to Transition 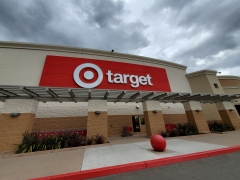 Just ahead of Pride month, Target has partnered with a brand called TomboyX to create and sell compression tops, which are marketed as a less restrictive version of a chest binder, used to flatten a female’s breasts and aid in a social transition.

Target’s decision to partner with brands that normalize LGBT apparel is destructive to the health of American youth. Of course, Target is a private entity and can do whatever it wants, but that doesn’t mean it won’t be controversial. There are two issues with Target’s new business ventures. It’s one thing for Target to sell bras and another brand to sell clothing mimicking chest binders, but for a big-box corporation to combine the two and sell unisex swimsuits and compression tops or chest binders normalizes the concepts that gender is either androgynous or fluid.

The website Bustle applauds Target for this endeavor. “As binders and gender-affirming swimsuits are notoriously difficult to find (particularly in extended sizes), this accessible drop will make shopping for everyday garments much easier.”

"Target reps have confirmed that this collection marks the first time the retailer has stocked compression tops in stores — a huge move for queer youth who wouldn’t regularly have access to gender-affirming products. The moment was not lost on customers, who have been flooding Twitter with celebratory posts."

All of the new garments are marketed specifically at trans youth, which is a miniscule portion of the population. LGBT youth is not yet mainstream. If one-third of the swimwear section is filled with unisex swimwear, it communicates that perhaps one-third of youth are LGBT — they are not, nor do they need to be.

Showcasing these items as if teenagers everywhere have been looking for a chest binder or unisex article of clothing grossly overestimates the number of LGBT youth, normalizing these items for kids who are not their target audience. This goes beyond a need to represent a population that claims to be marginalized. This is a blatant attempt to normalize something to which most teenagers cannot relate.

Given that the majority of kids feel comfortable with their biological sex and experience opposite sex attraction, where is the messaging that it’s okay to be male or female, masculine or feminine, and heterosexual? Male and female sexes are normal, good, healthy, and a part of orthodox society.

The second issue is that Target is specifically normalizing chest binders, an article of clothing that is widely controversial. When the New York Times asked for feedback on chest binders from people who wear them, the responses showcased their potential harm.

One teenager wrote, “Binders tend to be used as a temporary solution to the problem of having breasts and cannot be worn at all times. During exercise they can restrict breathing, and back and chest pain can come from wearing them for more than about eight hours at a time. You should also never sleep with a binder on.”

A 20-year-old wrote in and said, “The longer I used binding, the more I could feel my body deteriorating. The physical pain got worse but so did the emotional. Slowly I began living a life where I couldn’t not bind. The initial euphoria of flatness turned into never being able to get flat enough. My body aches every day, I no longer have the lung capacity I once had, and my ribs have inverted. I fear breaking one when I sneeze.”

A 2017 study found that many trans-identifying individuals who engaged in chest binding “experienced at least one negative health outcome from binding including pain, overheating, and shortness of breath. Fifty even reported rib fractures.”

Transgender activists might review these quotes and study and claim this is exactly why surgery to transition is necessary. Studies and science show that transition procedures are harmful, especially to youth.

The chest compression garment Target sells is supposed to be less restrictive than a chest binder, but with this history, why would Target purposely sell something that is harmful to youth to gain brownie points with activists? This seems both disingenuous of Target, at best, and at worst, another mainstream effort to normalize and push androgyny or gender fluidity onto unsuspecting young people.