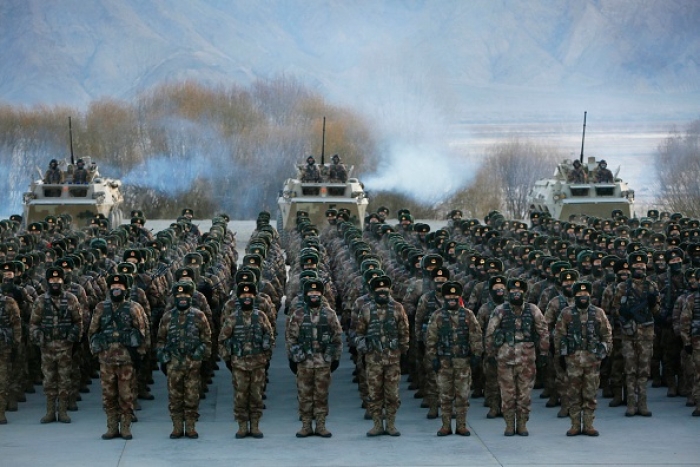 While President Joe Biden was in Brussels and Warsaw showing U.S. solidarity with Ukraine, the 38-year-old autocrat who rules North Korea made a bold bid for the president's attention.

For the first time since 2017, Kim Jong Un test-fired an intercontinental ballistic missile, the Hwasong-17, the largest road-mobile missile ever launched.

While it flew 600 miles from Pyongyang into the Sea of Japan, the mammoth missile flew for 71 minutes, reaching an altitude of 3,852 miles.

Had it been fired in a normal trajectory, its missile warheads could have reached Washington, D.C., and every city in the USA.

As any first strike on the United States with such a weapon would ensure the destruction of Kim's dynasty, regime and country, clearly, this ICBM test is a bid to demand new negotiations with the U.S.

Kim's goals are to have the U.S. lift sanctions, recognize his regime, remove U.S. bases and troops from South Korea, and start up trade while he steadily expands his arsenal of missiles and nuclear warheads as both an insurance policy and an instrument of extortion.

The U.S. and South Korea have both expressed skepticism about the launch, believing Pyongyang may have test-fired an upgraded and older Hwasong-15 that carries a single warhead.

But Kim is not the only Asian autocrat on the move.

China's President Xi Jinping and Russia's President Vladimir Putin lately sent a flotilla of 10 warships — destroyers, frigates, corvettes — five Chinese and five Russian — through the Tsugaru Strait between Japan's home islands of Honshu and Hokkaido and then back again through the Osumi Strait off the Japanese island of Kyushu.

This is believed to be the first joint Chinese-Russian naval patrol ever conducted in the Western Pacific.

Beijing has also begun anew flying fleets of dozens of jet fighters and bombers into Taiwan's Air Defense Identification Zone, to test the island's defenses and send a message to Taipei as to whom it is that the island truly belongs.

China also continues to press its claim to Japan's Senkaku Islands in the East China Sea, even as it completes the militarization of Mischief Reef, Subi Reef and Fiery Cross Reef in the South China Sea.

"China has equipped at least three islands it has built in a disputed area of the South China Sea with anti-aircraft missile systems, fighter jets and laser and jamming equipment — a buildup that threatens all other nations in the region, a top US military commander said."

Adm. John Aquilino, who heads the U.S. Indo-Pacific Command, is quoted as telling the Associated Press that China's activity in East Asia is part of "the largest military buildup since World War II."

China's Navy now has 355 warships if all vessels from corvettes to carriers are counted. That is 50 more vessels than the U.S. Navy, though the U.S. Navy has many more missile tubes for firing weapons and Beijing has no warship of the size or firepower of a U.S. aircraft carrier.

Yet, again, China seems on the move far beyond what it claims as its territorial waters in the South and East China Seas.

Last week, in what Australia's former Prime Minister Kevin Rudd called "one of the most significant security developments ... in decades," the Solomon Islands revealed that it was signing a security pact with Beijing that would permit the establishment of Chinese bases there.

Among the Solomons chain is Guadalcanal, familiar to U.S. Marines from the first days of fighting in the Pacific in World War II.

The Solomon Islands are 1,400 miles from Australia, and the alarm in Canberra at the prospect of a Solomons-China security treaty is shared by New Zealand.

Again, what would be the purpose of Chinese security ties to unthreatened islands so far from China but so close to Australia?

Beijing appears to be playing a long game, the goal of which is domination of East Asia and the Western pacific, severance of the U.S. alliances there and the expulsion of American power back to Guam and Hawaii.

Consider the state of play:

China's partners in East Asia, North Korea and Russia possess nuclear weapons. But none of America's allies — Japan, South Korea, Australia, the Philippines — has ever tested a nuclear weapon.

Nor has Taiwan, which spends a piddling 2% of GDP on defense, despite the growing menace of Beijing. In the final analysis, all of our allies and partners on the far side of the Pacific depend for their defense on America.

Before the Ukraine crisis exploded with the invasion ordered by Putin's Russia, the foreign policy consensus was that America would be making a historic "pivot to Asia." For that is where the challenges of the future to America's global primacy would appear to come.

That may still be true.