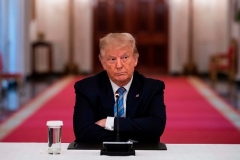 President Donald Trump hosts a roundtable discussion on the Safe Reopening of Americas Schools during the coronavirus pandemic on July 7, 2020. (Photo by JIM WATSON/AFP via Getty Images)

Five weeks later, on Labor Day, Dukakis was down eight points, the same margin by which he would lose the election. He had lost 25 points in one month.

What had happened? During August, Republican attack groups elevated and relentlessly pounded what might be called Dukakis' Bay State radical liberalism.

He had proudly called himself a card-carrying member of the ACLU. He had vetoed a bill requiring the Pledge of Allegiance in Massachusetts' schools. He was against imposing the death penalty. He had issued weekend passes to convicted killers such as the infamous Willie Horton, who had used his get-out-of-jail-free card to go to Maryland and rape and murder.

Is this possible today? Because a turnaround of that magnitude appears to be needed by Donald J. Trump.

Over the weekend, the bad news on the virus front turned awful, for the country and Trump.

The U.S. dead from the coronavirus hit 135,000. COVID-19 deaths, whose weekly average had been falling since April, began to rise again.

New cases of the infection began appearing in previously unseen numbers across the Sun Belt. Florida set a U.S. record with more than 15,000 new cases in one day.

This surge in infections is occurring as the nation debates whether to send its young back to schools. Children, teachers and students could arrive in classrooms in the millions in late summer only to be sent home in a new shutdown as a second wave of COVID-19 hits this fall.

Were that not enough to concentrate the mind, an economy that was as strong as any in modern history last winter now looks to be in a depression. The good news of the May-June revival could be canceled out by shutdowns mandated by the new infections.

Beyond this, America's racial divide has reopened. The attacks on cops and their demonization in the wake of the killing of George Floyd, has led to demoralization, resignations and retirements, and, from there, to an explosion of shootings and killings in major cities.

And we have witnessed the outbreak of a cultural revolution, which holds that as America has, from birth, been a slave-owning society whose policies toward the native-born amounted to cultural and ethnic genocide, the statues of those generations of men who produced such a history should all be pulled down and smashed.

A medical crisis, an economic crisis, and a cultural and social crisis, have hit us all at once, raising some fundamental questions.

Does America retain the unity, strength and sense of purpose to lead the world? Is American democracy still the model for mankind?

Trump is not responsible for the COVID-19 pandemic. And the shutdowns that induced today's depression were as much the decisions of governors and mayors as of the president. Yet, he is the one whose fate is tied to the state of the economy in November 2020.

And, politically, Trump is the one paying the price.

Several national polls have Joe Biden up by 10 points or more, and polls in swing states, as well as must-carry states for Trump such as Florida, have Biden leading. In the money primary, Biden and the Democrats turned May and June into winning months. Their Senate candidates are awash in cash in states where they had been seen as sacrificial lambs.

The pundits, following the polls, are giddily predicting a Biden win, a recapture of the Senate and the retention of Democratic control of the House.

What can Trump do? What should Trump do?

In 1948, Harry Truman looked like a certain loser to Gov. Tom Dewey. So he sent a raft of liberal legislation to the Hill and challenged the Republican Congress to enact it. When Congress airily dismissed his proposals, Truman barnstormed the country, calling on America to help him rid the nation of this "no-good, do-nothing 80th Congress."

Which the country proceeded to do, as it elected Truman and threw out the first Republican Congress to sit since before the Depression.

What the Trump folks must do now is to zero in on Biden's vulnerabilities, personal and political.

First among these is Biden's transparently diminished verbal and mental capacity. He is no longer the man who bested Paul Ryan in the vice presidential debate of 2012. Even during controlled appearances where he reads from a teleprompter, Biden emits a sense of unease that he will lose control of his ghostwritten script.

Second, the Biden campaign has embraced an agenda that is, in part, Bernie Sanders-AOC-Black Lives Matter.

The Trump folks need to force Biden to come out of his basement and either embrace or renounce the radical elements of his agenda. They need to do for Biden what Lee Atwater & Co. did for Dukakis.