Message From Ukraine: Nukes Do Deter 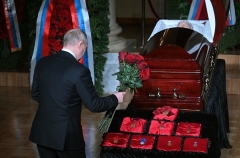 On April 8, 2022, Russian President Vladimir Putin lays flowers for the late Russian nationalist politician Vladimir Zhirinovsky, a key figure in the country's post-Soviet history, who died at the age of 75. (Photo by SERGEI GUNEYEV/SPUTNIK/AFP via Getty Images)

When he arrived at Christ the Savior Cathedral to pay his respects to the ultra-nationalist Vladimir Zhirinovsky, who had died of COVID-19, Russian President Vladimir Putin carried a clutch of red roses.

The man beside him was carrying a briefcase.

That briefcase appeared to be Russia's version of the "football" that is carried by a military aide to U.S. presidents and contains the codes for launching strategic nuclear weapons.

French King Louis XIV had stamped upon his cannon the inscription, "Ultima Ratio Regum" — The Last Argument of Kings.

In our era, nuclear weapons are the ultima ratio of nation-states. And what Putin was saying with his briefcase-carrying aide beside him was that, rather than accept defeat and humiliation in the Ukraine war, he may resort to the use of tactical atomic weapons.

And Putin is not the only one reminding us of the utility of having nuclear weapons and the folly of giving them up.

In 1991, when the Soviet Union dissolved into 15 nations, a newly independent Ukraine controlled its own large arsenal of nuclear weapons.

At the behest of the United States and in return for U.S. security guarantees, Kyiv gave them up and sent them all back to Russia.

Ukraine is living today with the consequences of that decision.

It is a victim of aggression by Russia, while the U.S. is inhibited in what it will do to assist Kyiv by an awareness that Russia has hundreds of tactical nuclear weapons, which Putin has signaled that, in the event of a true "existential" crisis, he may use.

Ukraine is in its present crisis because Moscow has the world's largest nuclear arsenal, while Ukraine gave up its nuclear weapons in the 1990s.

The world is surely taking note of this fact.

South Korea relies on U.S. nuclear weapons to deter a nuclear-armed North Korea. Seoul also relies on the U.S. to retaliate against the North for any first use of nukes against the South.

And the issue is not an academic one.

Last week, Pyongyang warned that in the event of a clash with the South, its nuclear weapons would be used "at the outset of war."

Seoul must today be observing Ukraine with some intensity. For there the U.S. is carefully calibrating whether the weapons they send to help Ukraine fight for its national existence violate a Moscow red line.

Could South Korea expect similar U.S. caution as to what weapons it would use in defending the country from a nuclear-armed North?

According to one U.S. poll, 71% of all South Koreans support the acquisition of their own arsenal of nuclear weapons.

China, too, has been observing how the United States has been inhibited by Russia's nuclear arsenal in deciding which weapons to send, and which not to send, to Ukraine.

In Beijing, this question is surely being debated:

China may soon be testing U.S. resolve in the Taiwan Strait. For, like Ukraine, Taiwan has no treaty alliance obligating the United States to defend it.

Observing the restrictions we have put on military aid to Ukraine, what must they be thinking now?

Iran is currently renegotiating a return to the nuclear arms deal of 2015. Under that agreement, Iran was granted relief from sanctions and a return to the world economy. In return, Tehran pledged not to test or acquire nuclear weapons and to open its nuclear facilities to inspection to show it was complying with the treaty.

Why has Iran, which has the ability to enrich uranium to weapons-grade but has never done so, forgone the testing and the building of nuclear weapons?

Iran appears to have concluded that its security would be more imperiled than enhanced if it sought to test a nuclear device preparatory to building a bomb.

A nuclear weapons test, if successful, would bring to Iran the possibility of war with a nuclear-armed Israel, as well as the potential destruction of all of its nuclear sites by the United States.

If Iran built a bomb, the Turks and Saudis might soon follow, and the ayatollah's Iran would be less secure than it is today. Iran's Persians, after all, are a minority in an Arab-dominated Middle East, and Iran's Shia are but a fraction of the numbers of the Sunni Arab population.

What the Ukraine war has demonstrated is the vulnerability of not having nukes.