Nationalism to Confront Globalism in Glasgow 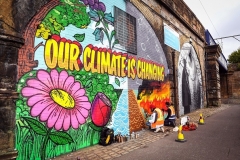 Street artists paint a mural on a wall opposite the COP26 climate summit venue in Glasgow on October 13, 2021. (Photo by ANDY BUCHANAN/AFP via Getty Images)

"Extraordinary, isn't it? I've been hearing all about COP," said the queen to the duchess of Cornwall. "Still don't know who is coming. ... We only know about people who are not coming. ... It's really irritating when they talk but they don't do."

Queen Elizabeth II was expressing her exasperation at the possible number of no-shows at the U.K.'s coming climate summit in Glasgow, Scotland.

Among the absentees may be Chinese President Xi Jinping, whose country generates more carbon dioxide than the U.S. and EU combined.

Behind the queen's exasperation, however, lies a political reality.

Nations like China are discovering that meeting goals for cutting carbon emissions can stall economic growth to where the regime itself is at peril.

Forced to choose between what is best for the country now and what is better for mankind in some indeterminate future, leaders are putting the needs of the nation today over the call of the world of tomorrow.

As the countdown to Glasgow proceeds, China's energy situation is described by The New York Times:

"China's electricity shortage is rippling across factories and industries, testing the nation's status as the world's capital for reliable manufacturing. The shortage prompted the authorities to announce on Wednesday a national rush to mine and burn more coal, despite their previous pledges to curb emissions that cause climate change.

"Mines that were closed without authorization have been ordered to reopen. Coal mines and coal-fired power plants that were shut for repairs are also to be reopened. Tax incentives are being drafted for coal-fired power plants. ... Local governments have been warned to be more cautious about limits on energy use that had been imposed partly in response to climate change concerns."

Earlier this year, Beijing had pledged to stop building coal-fired power plants outside China. But at home, Beijing is going all-out to mine and burn coal to keep the world's greatest manufacturing plant producing and the world's largest labor force employed.

Forced to choose between fighting climate change and preventing a possible recession or depression, Xi is unapologetically putting China first.

Nor is China the only Asian economic power grappling with an energy shortage. India, the world's third-largest producer of carbon emissions after China and the U.S., is facing a potential power crisis.

Coal accounts for 70% of India's electricity generation. Yet, 4 in 5 of its 135 coal-fired power plants have critically low levels of coal inventory. With its economy picking up, New Delhi is going to be in the market for more coal to burn. Lectures about carbon emissions are likely to go unheeded.

In Europe, wholesale electricity prices have increased 200% since 2019, a result of surging natural gas costs driven by high demand in Asia and lower-than-expected deliveries from Russia.

Most EU countries rely on gas-fired power stations to meet electricity demand. Some 40% of that gas comes from Russia. With completion of the Nord Stream II pipeline, German and EU dependence on Russian gas is going to rise.

Is Russia, rich in fossil fuels that are still in demand, and the world's fourth-largest producer of carbon dioxide, likely to placidly accept watching its customers move away from Russian coal, oil and gas to solar and wind?

Oil is at its highest price since OPEC launched its price war against U.S. shale producers. In November 2014, OPEC stunned world oil markets by refusing to curb production amid soaring shale output.

Crude prices went into free-fall as OPEC sought to drive the higher-cost U.S. producers out of the market.

Why would OPEC nations that depend on oil exports for much of their national income champion a worldwide abandonment of the fossil fuel sales upon which their regimes' survival depends?

In brief, world demand for coal, oil and natural gas is surging, as are prices, just as the climate conference, whose goal is to reduce and eventually eliminate the burning of coal, oil and gas, is about to meet in Glasgow.

Will nations such as China, India and Russia be willing to forgo the coal, oil and gas upon which 80% of the world's power plants currently depend, to be replaced by windmills and solar panels?

At the insistence of Sen. Joe Manchin, the heart of President Joe Biden's climate agenda — a program to replace U.S. coal- and gas-fired power plants with wind, solar and nuclear energy by steadily increasing taxes on the former and subsidies for the latter — will apparently be dropped from the $3.5 trillion budget bill.

Prediction: In the long run, nationalists fighting to meet near-term needs of their constituents and countries are likely to prevail over the globalists who profess to be serving all of mankind.