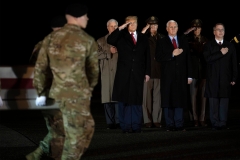 When a Wall Street Journal editorial warned this week against any precipitous U.S. withdrawal that might imperil our gains in Afghanistan, an exasperated President Trump shot back:

"Could someone please explain to them that we have been there for 19 years....and except at the beginning, we never really fought to win."

Is that true? Did we "never really" fight to win during our 19-year war in Afghanistan, except when we first ousted the Taliban in 2001?

At one point in this longest American war against al-Qaida and the Taliban, Barack Obama surged 100,000 U.S. troops into Afghanistan.

The issue here is with the terminology.

In the forever wars of the Middle East, what does "winning" mean?

To those of us who grew up in the mid-20th century, victory was Gen. MacArthur standing on the deck of the battleship Missouri in Tokyo Bay as top-hatted Japanese diplomats signed the articles of surrender.

Victory was unmistakable and irreversible.

Five years after V-J day, however, came Korea, a war that lasted three years and ended in deadlock, stalemate and a truce along the 38th parallel, where the North-South war had begun in June of 1950.

Vietnam also came to be called a "no-win war."

Though U.S. troops never lost a major battle, and every provincial capital was in Saigon's hands when we departed in 1973, the United States is said to have "lost the war" when the North Vietnamese army overran the South and Saigon in the spring of 1975.

That was a geostrategic defeat but not a military defeat.

America's problem, in this century, lies in our concept of "winning."

While U.S. military forces can crush any Middle East adversary, as we showed in Afghanistan in 2001 and Iraq in 2003, we have been unable to realize the fruits of the victories our armed forces produced.

While we can defeat our enemies in the air and on the seas and in cyberspace, we cannot persuade them to embrace secular democracy and its values any more than we can convert them to Christianity.

John Locke means nothing to these people. As for our Bill of Rights, why would devout Muslims, who believe there is but one God, Allah, and that Muhammad is his only Prophet, tolerate the preaching of heresies in their countries that can cause Muslims to lose their souls?

With our "democracy crusades," we have been trying to conquer and convert people who do not wish to be converted. Moreover, we lack the patience and perseverance to change or convert them.

As imperialists, we Americans are conspicuous failures.

Moreover, with us, the national interest inevitably asserts itself.

When it comes to spending lives and treasure indefinitely, we find we have no vital interest in whether these lands we occupy are ruled by monarchs, democrats, dictators, or demagogues, and we lack the staying power to occupy these countries until they accept our ideas and ideals.

If they don't attack us, why do we not just leave them be?

Our enemies in the Middle East do not defeat our military. They outlast us. They apparently have an inexhaustible supply of volunteers willing to give up their lives in suicide attacks. They are willing to fight on and trade casualties endlessly. They do not subscribe to our rules of war.

They tire us out, and, eventually, we give up and go home.

They refuse to surrender and submit because it is their beliefs, their values, their faith, their traditions, their tribe, their God, their culture, their civilization, their honor that they believe they are fighting for in what is, after all, their land, not ours.

Woodrow Wilson famously declared of our neighbors to the south, "I am going to teach the Latin American republics to elect good men!"

Wilson forgot the kernel of truth in the ethnic slur of his era, that you cannot grow bananas and democracy on the same piece of land.

If it is a contest between armed forces, America wins. We can impose our will on the country but cannot win their assent. They resist until we tire of trying to educate them.

Historically, the Afghans are fundamentalist, tribal, and impervious to foreign intervention.

What will the Taliban do when we leave?

They will not give up their dream of again ruling the Afghan nation and people. And they will fight until they have achieved that goal and their idea of victory: dominance.

And if 100,000 Americans fighting beside the Afghan army could not force them to surrender, then why should they settle for half a loaf and accept a compromise now?