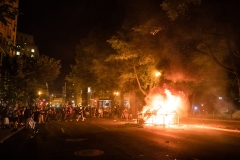 Rioters set a fire in the street a block from the White House while protesting the death of George Floyd at the hands of Minneapolis Police in Washington, D.C. (Photo credit: SAMUEL CORUM/AFP via Getty Images)

The month of June marks the 24th anniversary of an event that changed my life forever.  That morning, early in my pregnancy with my first child, I was violently attacked on a running path in Virginia by a complete stranger, a sexual predator who later was sentenced to 18 years for my assault along with that of two other women.

It was the most terrifying and traumatizing moment of my entire life. I have never spoken of the race of my assailant, nor will I now. It is irrelevant to my life.

However, the racially-charged unrest on our streets have made me reflect on the fact that the woman who saved me from being raped was black. She was a single mom with her son in the car, late for an appointment, but who saw another woman, not a white woman, but another woman in distress, and she stopped her car to save me.

She courageously stopped, and she honked, and she yelled and made an evil man run away.  She also called the police, who came as fast as they could.  The police didn’t ask about the race of the victim, and she didn’t mention it. We were both relieved when they came and were grateful when their detective work found the man whom I identified, but sadly not before there was another victim.

I remember crying and her hugging me as I bled on her beautiful white dress. She was an angel. Her name is Mary. We were two women united. Our bond was beyond race.

My question is:  Why are these “woke” mobs today trying to destroy what bonds us as human beings? The vast majority of Americans of every race are all in strong agreement that George Floyd’s murder was a travesty. Those who committed the crime must pay the price of their actions to the fullest extent of the law. No one in authority should be allowed to abuse others. Compassionate American women agree on this point, but something insidious has taken root.

Unfortunately, we are allowing an incident that unifies us so strongly to be used to divide our country. Peaceful protests by sincere citizens have now been largely hijacked and have disintegrated into an anarchist movement that may be setting civil rights progress back decades.

The lawless mobs tearing down statues dedicated to abolitionists expose the truth.  They purport to fight racism, but one look at the victims of their rage reveals the lie. Many are in fact hurting the very people for whom they pretend to fight. It isn’t about race anymore. It’s now about a “woke” left using others for their own selfish purposes.

Their cries to “defund the police” are a sick joke. To paraphrase James Madison, if men were angels, we wouldn’t need government. A vacuum will be filled. As I experienced, men are not angels, and the need for law enforcement is essential or else vigilante justice will ascend.

Where were the left’s politicians this week when South Carolina Sen. Tim Scott offered a bill that would actually change current law enforcement practices? No, they aren’t serious.

This has consequences.  Many women originally sympathetic are now no longer buying their message. Women want safety. We want our homes, families, and businesses protected. We must unite against a hijacked movement that threatens all of that.  Women seek to live in peace and unity. Why do so few of our leaders understand that?

Concerned Women for America members call on our nation’s leaders to rise up to the challenges this moment demands or resign. We are tired of standing by while our cities are burned, our heritage is erased, and our churches are desecrated.

Truth is the basis of all unity. Without it, there can be no union.

Some are trying to fight. President Donald Trump just issued an executive order to restore law and order.

Meanwhile, other leaders express support for the lawlessness while cowering in fear, hoping the mob does not come after them. Most appalling, even our spiritual leaders, many pastors, join the mob, ignoring their godless call for the destruction of the God-designed “nuclear family structure,” among many other anti-Christian teachings.

Just last week, one of the most prominent voices in the Black Lives Matter movement called for tearing down statues of Jesus. This is the mob many of our spiritual leaders have joined, taking a knee, in some cases literally, to what is tantamount to a new religion.

Our children’s future is threatened by the perversion of justice and the resulting shattering of hope.