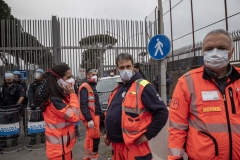 The United States is in the process of destroying its health care system via lockdown; ordering that all but emergency medical treatments and procedures cease in the name of preserving health system capacity, we have emptied out hospitals to gird for a wave of COVID patients that never came.

Now hospitals are laying off and furloughing by the tens of thousands – and liberal opportunists see this, somehow, as a market failure that would justify government directly seizing control of the medical system through a Medicare-for-all plan.  Liberals look at the virus response in Italy, Spain, France, and the United Kingdom and think – somehow – that's what we need here. But we don't have to look to the catastrophic failures of systems abroad as a cautionary tale, because here in America the two biggest failures in our coronavirus response were failures of centralized government control.

The slow start in the American health response was caused by a failed testing rollout, due to incompetent bureaucracy that prohibited private sector testing in favor of a CDC test that didn't work and was contaminated by live virus. When it finally did work, there were severe capacity constraints – a problem caused not by too little centralized government control, but by too much.

As government loosened its grip and allowed private labs to conduct testing, capacity scaled up dramatically. This is a lesson we could have learned from South Korea's experience, where its widely praised testing program was developed not by the national health system, but by private companies that were promised fast regulatory approval.

The second major policy failure was the decision that crippled our health system capacity and likely significantly increases deaths from all causes. It was a directive from Medicare – the very program liberals now seek to expand to everyone to the exclusion of all choice and competition.

On March 18, the Centers for Medicare & Medicaid Services (CMS) "announced that all elective surgeries, non-essential medical, surgical, and dental procedures be delayed during the 2019 Novel Coronavirus (COVID-19) outbreak."

With few if any exceptions, every health system in America implemented the directive, emptying out hospitals and doctors' offices and crippling health system capacity everywhere for an anticipated wave of coronavirus patients that failed to materialize. The Mayo Clinic, for instance, is furloughing or cutting the pay of 30,000 employees.

Emulating the fully government-controlled National Health Service in Great Britain, Medicare made the call that denied cancer patients care they need, ended more transplant surgeries, and sent a panic through the country keeping heart attack and stroke victims at home under the mistaken impression that the empty hospitals were too busy to help them.

In the face of this Medicare-caused catastrophe, liberals have floated the new argument that in a fully government-run system, hospitals wouldn't suffer crippling revenue loss from canceling nearly all of their non-COVID medical services – because they would have direct taxpayer funding.

As if disconnecting revenue from the provision of actual medical care is somehow a virtue, they are taking the lesson that we should look at the catastrophic misallocation of resources by government we are currently seeing and institutionalize it permanently. Not to mention that for the math of the Bernie Sanders plan to even pretend to be realistic, he assumes that all providers would accept current Medicare rates, which are about 40 percent lower than what private insurance pays.

It's a recipe for making all of the temporary hospital closures and furloughs into permanent bankruptcies. The only solution under Medicare for All would be even more massive, economy-crippling tax hikes than have already been proposed, possibly doubling every existing federal tax or more. Most likely we'd end up in the middle – with a smaller health system with less capacity, fewer ICU beds that would leave us less prepared for a future pandemic like Italy, Spain, and France – as well as steeply higher taxes.

Political or bureaucratic allocation of resources can never perform as well as a decentralized system that aggregates the decisions, preferences, and needs of millions of people. Every helpful action by the federal government during the crisis has taken the form of waiving or relaxing regulatory requirements, like telehealth and phone consult restrictions that never should have existed in the first place.

A more free market health system could avoid not just the catastrophic miscalculations like the one we are experiencing with the unnecessary collapse in non-COVID care, but also the everyday distortions caused by Medicare rules and petty federal regulations that tie the hands of doctors and patients. That's the real policy lesson of the current crisis.

Phil Kerpen is head of American Commitment and a leading free-market policy analyst and advocate in Washington. Kerpen was the principal policy and legislative strategist at Americans for Prosperity for over five years. He previously worked at the Free Enterprise Fund, the Club for Growth, and the Cato Institute. Kerpen is also a nationally syndicated columnist, chairman of the Internet Freedom Coalition, and author of the 2011 book "Democracy Denied."

Editor's Note: This piece was originally published on American Commitment.