How We Got to Roe v. Wade and Beyond 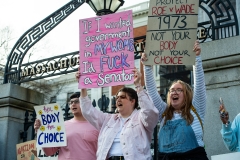 Pro-abortion activists protest after the leak of a draft of the Dobbs decision. (Photo credit: JOSEPH PREZIOSO/AFP via Getty Images)

WASHINGTON — In the good old days, when the liberals flourished, they undertook many grand designs.

Some actually worked, for instance, the interstate highway system that now girdles America. The Cold War was another liberal idea. It worked, at least at first, before the liberals went wobbly and the conservatives and independents had to come in and finish the liberals' work for them. Of course, the liberals' days are now long gone as they have been replaced by fanatics who call themselves progressives or leftists or socialists. Yet one thing the liberals of yore have in common with the modern-day American left is the tendency to go too far. They take a good idea — or at least a plausible idea — and they go too far with it. Sometimes they even ram it down the public's throat. The public does not always respond docilely.

Friday, we discovered how long some Americans will resist being bullied. The Supreme Court threw out a law rammed down their throats in 1973. Now abortion will be decided upon by the citizens of each state as it should have been decided back in 1973 during the Roe v. Wade arguments.

In the years leading up to 1973 — in the '50s and the '60s and early '70s — the liberals became increasingly anxious that something more severe than birth control should be implemented at a national level to deal with an issue that had become an obsession to them, overpopulation. They came to favor abortion, which is to say killing a baby in its mother's womb for the sake of birth control. The household condom was not enough; even an old-fashioned diaphragm was not enough. The liberals decided that they could use the Supreme Court to ram abortion down the American public's throat. Though America is not a unitary system of government but a federal system of government, and the issues of privacy and abortion are not mentioned in any of the federal government's founding documents, the liberals simply elevated privacy and abortion as moral rights and proceeded.

The Supreme Court on Friday said the advocates of abortion had gone too far and the court returned the question to the provenance of the states. Contrary to what the pro-abortion advocates are now saying, the court did not legalize abortion or illegalize it. The court merely said that abortion was a state matter, not a federal matter. The demonstrators in the streets are fanatics.

Many years ago, when the educational system still believed in educating rather than ministering to sexual hygiene or mental health, there was a course called civics. Civics taught students about the law and how they related to the law. Students understood the difference between a unitary system of government and a federal system of government or, for that matter, a monarchy or a dictatorship. Back then, the general public understood that there were matters that were beyond the court's jurisdiction. If civics were taught in the schools today, there would be no demonstrations in the streets. If abortion had remained with the states in 1973, abortion would have been settled years ago, and peacefully. California and New York would still be killing babies, but Texas and Mississippi and doubtless other states would not. Unfortunately, the liberals went too far in 1973's Roe v. Wade, and on the issue of abortion leftists are still at it and still demonstrating in the streets.

These people with their waving placards, their shouts of indignation, their threats to the safety of private citizens and even to the safety of Supreme Court justices, compose what I call the Moron Vote. They compose a growing minority of Americans, and many of my fellow countrymen and countrywomen fear they will someday rule the country. I am not so sure. Many of the placard-waving idiots are decidedly improvident.

I would offer the thought that with Roe v. Wade overturned and a wave vote forming out on the countryside, the Moron Vote is about to reach its apogee. If the Republicans play their cards right, they are going to be in office for years to come. In California and New York, the citizenry is going to busy itself with killing babies and lining up for welfare while the rest of us get on with normal life. The country is changing and not in the way that the media thinks.