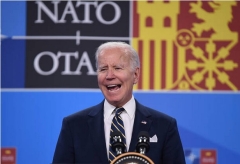 Breaking historic precedent has been for many years a specialty of the Democratic Party. It is always presented to the public by the media—the Democratic underground—as something that the Republicans are for some reason incapable of doing. Perhaps the Republicans are too timid. Possibly they are too stupid. Of course, it also might be because they think it is in bad taste. At any rate, I cannot think of a Republican having the boldness to break precedent.

As I say breaking precedent is the special domain of the Democratic Party, particularly if the Democrat's last name is Kennedy.

Not wearing a hat while on the campaign trail was first done by JFK, and he put a sizable number of hatmakers out of business in the election of 1960. Also, the first major candidate to ride a bicycle in the 2000s was that Kennedy lookalike Sen. John F. Kerry, whose initials were also JFK and whose bicycle riding almost killed him, as jogging on the upper roof of the Delta Queen almost killed Jimmy Carter back in 1979.

At any rate, Democrats are great precedent breakers. Do you remember Bill Clinton doing something or other the night that he accepted his party's nomination, which was considered unprecedented? I think he went alone down to Madison Square Garden to accept his party's nomination. Maybe he was wearing an Indian chief's headdress — no, that was President Calvin Coolidge. Yet, Bill did something that was considered dramatic and precedent-breaking at the 1992 convention, and it had nothing to do with Monica. She came later.

There were earlier precedent-breakers. The first was Jimmy Carter. Before Jimmy Carter, a member of the opposition party never said anything critical of the president while the critic was abroad. To do so was considered in poor taste. Then came Jimmy, and he spoke ill of Ronald Reagan when he was on foreign soil repeatedly if memory serves. After Jimmy, it was the rare Democrat who did not disparage a Republican president while traveling abroad. Al Gore did it after the 2000 race. John Kerry did it in 2004. And Hillary did it against Donald Trump. She did it while on a visit to London.

Well, now the Democrats are at it again. Prior to Joe Biden's presidency, no president traveling on foreign soil had ever said anything rude about a recent Supreme Court decision. It was considered unthinkable. Politics was supposed to stop at the water's edge. Yet, Joe has broken new ground in his criticism of the Supreme Court last week, and he was not just critical of one or two of the justices. He was critical of the entire majority of the Supreme Court. For those of you who might have been asleep last week, his vitriol had to do with the court's opinion of Roe v. Wade, which Joe found "extreme" and a dozen variations thereof. He has been sounding off like this as though he were in Peoria, Illinois, or Bull Snort, Georgia, but he was in Europe. While in Europe, he let the Supreme Court have it practically every time he opened his mouth. He did not use the F-word. Yet his handlers had to bundle him out of Europe before he did.

So, Joe is the latest in a long line of precedent-breaking Democrats, and he has extended his targets well beyond Republican presidents. He now includes the Supreme Court in his European diatribes. The justices are not fighting back, but others are. Over the weekend, the Republican from Utah, Sen. Mike Lee, called the president "unpatriotic." Who else will fire off a salvo at our president, and how will he defend himself?

I have an answer for Joe. He has made so many gaffes in his career, why not take advantage of what has been a historic weakness and turn it into a strength? At his next press conference, Joe should confess that he has committed another gaffe. Say, Joe, that you did not mean to attack the Supreme Court. Say you were just joshing. Tell the members of the court's majority to "lighten up." Joe, this majority is going to be around for a long time.