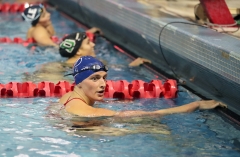 Pictured is Lia Thomas of the Pennsylvania Quakers after finishing a freestyle event during a tri-meet against the Yale Bulldogs and the Dartmouth Big Green. (Photo credit: Hunter Martin/Getty Images)

Of course, culture wars are politics by another name. Alas, we never can completely escape politics. If I wanted to write this week about cuisine at some point, I fear I would be capitulating to politics, for instance: how politics affects linguini or chop suey or beef. Politics is everywhere nowadays. I think the reason is that what was once called liberalism (and is now called the left) has spread into everything. Yet I shall restrain myself this week and talk only about athletics. Really, politics is a bore.

Now the sport I know best is swimming. I spent my early years swimming from one end of a pool to the other for as many as six miles a day. Swimming is one of those sports where men often train with women. Perhaps that is why I chose swimming. At any rate, we trained together. However, we did not compete with each other, for obvious reasons — at least, they were obvious when I was young. In every swimming event, the men surpassed the women. Men were stronger and — this may seem controversial — meaner, or at least more competitive. Perhaps this is changing, but I am always reminded of a very dear friend who held many world records. One day, she told me how she did it. It was elegance. She did not try to crush the opposition as men often do. She was concerned about her stroke mechanics — her pull, her kick — and she usually won. Incidentally, by the time she entered college, she dropped out of swimming. As I recall, it was something about her shoulders becoming too hefty.

Which brings to mind another story from the world of athletics involving women. One evening, I appeared on television with Pete Rozelle, the head of the National Football League. We were appearing with a leading feminist, who, by the way, was built like a linebacker. She proclaimed that the time would come when women would be as big as men, and they would be competing with men in the NFL. All that held womankind back, she said, was "institutional sexism." That was some 50 years ago, and her promised epiphany has not taken place yet.

Today, women who seek to compete in sports are faced with the most perverse threat imaginable. Men are dominating their sporting events. And where are the feminists? For the most part, they seem to be supporting the male interlopers. What is more, where are the progressives? They remain silent, or they support the interlopers. The men claim to be transgender, and I guess they can compete as women in women's athletics or as men or whatever else they want to claim. How about as angels?

What can the women do to preserve women's sports? I thought for a while the women swimmers could simply don flippers and power themselves through the water with a stronger kick than the trans crowd, but these fellows (or fellowesses) are smart. Their response is to strap on their own pair of flippers. What will the ladies do next, strap on hand paddles?

Well, I have come up with a solution that ought to placate everyone. Americans of a certain forward-leaning persuasion relish being on the side of progress. The trans crowd is certainly drawn from this sector of Americans. They and their advocates should claim that they represent the latest evolution of the species, the third sex, the trans sect. Why should excellence in sport be denied to the third sex? Henceforth, there will be male swimming events, female swimming events, and trans swimming events. Anyone who would deny the trans the right to compete against other transes is simply behind the times. Surely, the National Collegiate Athletic Association and the Amateur Athletic Union will sanction the third sex movement. It is only a matter of time before the United States Olympic Committee takes a stand for trans athletes everywhere.

Now I said at the outset of this column that I would avoid politics, but I see that I have failed. As I also said, politics is everywhere today. It has even entered the swimming pool. Yet I have offered a solution to the trans threat. It is perfectly reasonable. We shall have a world record for the males, for the females, and for the transgenders. My only question is what sort of swimwear they might wear. I shall leave that question for the experts.