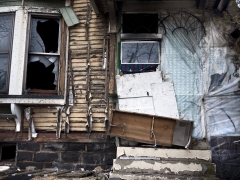 Vacant homes, high crime and urban blight mar what was once one of the busiest steel mill towns along the famous American Rust Belt on February 7, 2012 in Youngstown, Ohio. (Photo credit: Benjamin Lowy/Getty Images)

Antifa and Black Lives Matter are destroying property and assaulting people, ostensibly protesting the misfortunes of the have-nots. But it doesn’t have to be this way. Despite endless media coverage of the violence, many impoverished people around the country aren’t choosing this path of destruction.

In "America Lost," documentary filmmaker Chris Rufo set out to showcase the economic decline of three impoverished cities around the country. He did not intend to look beyond that basic level of analysis. But he could not ignore the fact that there was something more to it. The structures that once held society together, such as families and jobs, had fallen apart. It wasn’t just that these places were falling apart economically; they were falling apart culturally.

He interviewed people who were trying to get by and improve their lives. The themes of faith, family, and community kept reemerging in his analysis, as ways of how folks are dealing with poverty and pulling their way out of it.

The visuals in "America Lost" are heartbreaking. It is staggering to see that much poverty going on for miles on end with little hope of anything changing; government has been unable to turn things around. More than 50 million Americans live in distressed communities.

Most people have heard of Youngstown, Ohio, the first city Rufo examines, because it used to be a booming steel town. Since the steel industry left, however, it has become the poorest city in America, with a poverty rate of around 40%. The city failed to make the transition from the modern to the postmodern world. There are blocks and blocks of deserted, boarded-up homes, some in the process of being knocked down. So many people die from opioid overdoses that the county coroner can’t handle all the bodies. Rufo interviews an ex-steelworker who now scraps abandoned homes to get by.

He also speaks with Jennifer, a young mom who gave birth to her daughter Nicki at age 15. She wants a better life for her, but at the same time doesn’t want her to leave. Nicki predicts the city will eventually become a boarded-up ghost town. She says no one seems really happy and there is a lot of drug and alcohol abuse. She ends up staying there, but starts community college.

Next, Rufo travels to Memphis, Tenn. Once thriving in the 1950s and known as the City of Churches, companies like Firestone left the city, gutting the middle class. Streets have been taken over by gangs, drugs, and violence, and 46% of black men do not have jobs. One ZIP Code with 6,000 residents has only 10 nuclear families. Rufo interviews a felon and a single mom and observes that bureaucracy can only assist with people’s most basic needs. It can’t stop the breakdown of the family. You can’t reduce human beings to economics. Sadly, after Rufo made the documentary, the felon went back behind bars for felony assault.

The documentary concludes looking at Stockton, Calif., the biggest city in the country to go bankrupt, another victim of the post-industrial economy. In some areas of Section 8 housing there, 100% of all children are born to single mothers. A local police officer refers to the city as a “plague of despair.” He notes the memorials frequently placed on street corners downtown, tributes to the mostly young men who have died due to drugs and gangs.

Rufo interviews Michael, a heavily tattooed young man who is trying to turn his life around and support his family. Although he served time behind bars, he persists and finds employment, explaining that having a family is what gave him a reason to change.

Ultimately, Rufo finds confirmation that faith-based organizations are still the cornerstone of poor communities. Inner-city churches are often the only remaining institutions that offer a clear sense of meaning, purpose, and community. The Victory Outreach recovery program for men in Stockton has a 70% success rate at turning lives around.

Rufo told PJ Media, “communities have stopped waiting for solutions from D.C. and started to take their destiny into their own hands. I call this the ‘inside-out’ model, which recognizes that families, neighborhoods, and churches are the real building blocks of society, and within the direct control of local communities. That’s the hope for the future of these cities.”

Antifa and Black Lives Matter may get all the attention, but how are they helping these impoverished communities? What are they doing other than burning them down? If you talk to the people in these communities, the real answers lie elsewhere.

"America Lost" is scheduled to air on PBS on Tuesday at 9 p.m. Eastern. It is also available on Amazon and from the website.

Rachel Alexander is a Townhall columnist and a former Steam.org senior editor.