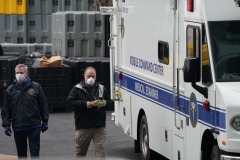 Members of the NYC Medical Examiners Office at the site as workers build a makeshift morgue outside of Bellevue Hospital to handle an expected surge in Coronavirus victims. (Photo credit: BRYAN R. SMITH/AFP via Getty Images)

It's been nearly two hundred years since the 25-year old Alexis de Tocqueville arrived in America in May 1831 for his nine-month visit. Only 30 when he published the first part of his great work, "Democracy in America," even at such a tender age, Tocqueville proved himself to be a political philosopher of the first rank. As importantly, he was a keen observer of the emerging American character and the American way of confronting what he called life's inevitable "vicissitudes of fortune."

As our nation begins emerging from the COVID-19 pandemic and preparing for the reopening of America – indeed, the reinvigoration of America! – Tocqueville has been on my mind. What he wrote in 1831 in "Democracy in America" regarding the proclivities of Americans to embrace private associations and voluntary activity aimed at achieving common societal goals is especially pertinent now.

In one of the most oft-quoted passages in his book, Tocqueville observed:

"The political associations which exist in the United States are only a single feature in the midst of the immense assemblage of associations in that country. Americans of all ages, all conditions, and all dispositions, constantly form associations. They have not only commercial and manufacturing companies, in which all take part, but associations of a thousand other kinds – religious, moral, serious, futile, extensive, or restricted, enormous or diminutive."

In the midst of the our current coronavirus travails, even as government has assumed an unprecedented massive relief role, we continue to witness the multitude of ways that religious institutions, food banks, civic groups, private foundations, charitable organizations, and, as Tocqueville put it, "associations of a thousand other kinds," play a crucial role in ameliorating our difficulties.

A shrewd student of human nature, Tocqueville understood that, when individuals participate in voluntary associations in pursuit of a common objective, "the heart is enlarged…by the reciprocal influence of men upon each other."

None of this is to say that Tocqueville didn't acknowledge a proper role for government. Interestingly, in discussing local administration in Massachusetts, he pointed to a 1797 state law with special resonance today. The statute provided that when "a stranger arrives in a township from a country where a contagious disease prevails, and he falls ill," two justices of the peace, with the assent of the local selectmen, can "remove and take care of him." Sound familiar?

At a time when the size of America's government was truly miniscule, Tocqueville was especially prescient in his worry about the natural tendency, even of democracies, to dangerous centralizations of power that, inevitably, threaten individual freedom. According to Tocqueville, the majoritarian impulse, inherent in a democracy, would impel the government to amass ever more power as it seeks to impose ever greater degrees of what he called "equality of condition." To Tocqueville's mind, by such aggrandizement of authority, government would take "each member of the community in its powerful grasp."

To be sure, I do not want to be misunderstood as suggesting that in the current crisis our national, state, and local governments have not been justified in taking some extraordinary measures to protect the health, safety, and well-being of the American people. While surely there is room for legitimate public debate regarding the size, scope, and duration of the various unprecedented lockdown mandates, financial relief packages, and the like, my present purpose is not to critique what has been done so far. Rather, I want to urge, as America returns to what Warren Harding famously called "normalcy" not long after the 1918 influenza pandemic, that we do with a Tocquevillian mindset.

By a Tocquevillian mindset, I mean to suggest that the vast assertion of government control that has been quickly implemented for health and safety reasons, along with the extraordinary level of government largesse made available for purposes of economic relief, should be scaled back to pre-crisis levels as soon as reasonably possible. Such retrenchment will help ensure that incentives for Americans to get back to work as the pandemic recedes are not diminished. And it will help ensure that the voluntary associations that Tocqueville so admired will have the incentives – and breathing space – they need to continue providing community services and mutual aid in a way that does not further heighten Americans' dependence on government.

And, finally, this too from "Democracy in America" is especially worth remembering now:

"America is a land of wonders, in which everything is in constant motion, and every movement seems an improvement. The idea of novelty is there indissolubly connected with the idea of amelioration. No natural boundary seems to be set to the efforts of man; and what is not yet done is only what he has not yet attempted to do."

America is still a land of wonders. The voluntary associations that so impressed Tocqueville during his visit nearly two centuries ago, and which have enlarged the hearts of Americans ever since, must play an important role in fostering the recovery of the nation's social and economic fabric, and, as importantly, in reinvigorating the uniquely American spirit.

Randolph May is President of the Free State Foundation, a free market-oriented think tank in Rockville, MD.