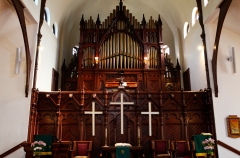 Featured is the front of a church. (Photo credit: Raymond Boyd/Getty Images)

We recently completed the Octave of Easter, the eight-day period in which we celebrate Christ’s resurrection, as testified to by the disciples who witnessed it. That liturgical season is an elaboration on the seven-day sequence of creation, in which God made the world — in fact, made all of reality — in six days, and then rested on the seventh.

The symbolic significance of the eight days is that this Octave marks the beginning of a new creation. Jesus has shown us, through his death and rising, that we too have the hope of immortality. What Jesus accomplished can be our goal as well.

That’s the supreme revelation of the world’s true order, an order designed and controlled by God. We participate in it through our faith in him, but it’s his doing, not an accomplishment of man.

For some time now, we’ve been hearing about a so-called new world order. This concept has been referred to by several names. The terminology currently favored is the Great Reset. But by whatever label, it’s a way of living designed and controlled by human beings, in which God has little or no part.

Indeed, God’s true world order is disparaged and rejected, because it’s detrimental to the vision of the new world order based on human will.

The new world order claims a great vision for a just and equitable future, but in reality its focus is always on the now. Its dream is to make humanity conform to an image conjured up by an elite leadership. So its ongoing challenge is controlling human behavior in the present.

God, on the other hand, offers us eternity. And in the true world order, he’s in charge. This imposes a cap on human efforts to exercise control.

No matter how much our leaders may plot and plan, no matter what political, economic, and social power is gathered into one centralized authority, there are limits to how much the course of life can be directed.

If we live our lives according to the precepts of the true world order — which is to say, by the will of God — then our aspirations, our expectations, our individual identities, are not set by the dictates of the elite. Regardless of our physical circumstances, we are spiritually free. The future is ours, to make of it what we’re able.

The thought that people can have such freedom tends to make advocates of the new world order very uncomfortable. There are people who are acting on that discomfort, who are trying to accelerate the resetting of our way of life.

You may have heard predictions of a food shortage. In an intriguing set of coincidences, large tracts of farmland have been bought up by certain huge moneyed interests. At the same time, the number of food animals being bred has been reduced, partly to control the outbreak of a highly mysterious bird flu among chickens.

Add to that the refusal of certain railroads to accept shipments of nitrogen-based fertilizers (just at planting time). And then there’s that extremely curious rash of fires at food-processing plants around the country.

Far be it from me to suggest there might be conspiracies afoot. But it does seem obvious that controlling the food supply is an effective way to control people’s behavior.

Another approach is tracking people’s assets and purchases. This is made increasingly possible though a global, technology-based financial system that’s ever more centralized, interconnected, and monitored. Your purchases (at least those made by credit card) are known; that information is shared; and through this knowledge your preferences are being influenced.

It’s a relatively small step from such manipulation to redistributing wealth. In fact, that very thing is being advocated in the name of meeting the needs of all the world’s people. Plans are currently being laid by the World Economic Forum, the International Monetary Fund, and a host of federal agencies and non-governmental organizations.

Throw in population control initiatives, of which promotion of abortion is the most visible component. Add open borders, by which cultural identity and civic peace are weakened and people lose control of their own communities.

And don’t forget about our current celebration of gender fluidity and the whole LGBT menu of sexual adventurism, an assault on marriage and family life that’s unprecedented in our history.

All of this shows how intent are the advocates of the new world order on destroying God’s true world order.

The essence of Christ’s resurrection is freedom — the ultimate expression of which is eternal life. As Christians we are called to hold up the truth of that great event memorialized in the Octave of Easter. We’re called to defend God’s true world order.