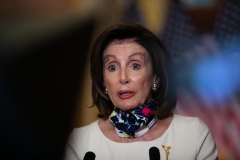 As everyone knows by now, San Francisco Archbishop Salvatore Cordileone recently instructed House Speaker Nancy Pelosi that she is no longer to receive Holy Communion. In a letter of explanation, the archbishop noted that his action followed an extended dialogue with Pelosi about her long and vigorous support for abortion.

A couple of days later, the Speaker presented herself for Communion — and received it — at a church in the Archdiocese of Washington, on the opposite side of the country.

Then, as if the situation wasn’t perplexing enough, Pope Francis elevated Cordileone’s California colleague, San Diego Bishop Robert W. McElroy, to the rank of Cardinal. Cordileone was not so honored.

It is significant that McElroy has opposed withholding Communion from pro-abortion politicians. Writing in the Jesuit magazine, America, McElroy maintained, that such a move could “bring tremendously destructive consequences — not because of what it says about abortion, but because of what it says about the Eucharist.” He warned that the sacrament should not be “weaponized and deployed as a tool in political warfare.”

This, of course, reflects a widely held view that the Church should not “politicize” the central act of Catholic worship. That argument is made frequently by abortion advocates. It’s been heard with special intensity since the preliminary draft of a Supreme Court opinion on Roe v. Wade was leaked (a highly political act to which pro-aborts have not objected).

Also, it speaks to the popular notion that Church leaders must not question the decisions of individual consciences. No less a great theologian than Whoopi Goldberg has admonished Cordileone that, “This is not your job, dude!”

All of which demands some effort at clarification.

The archbishop’s action was not political. Rather, it was sacramental. And certainly it was his job. As chief pastor of the archdiocese, Cordileone is empowered — obligated, really — to instruct someone who is committing a grave sin. This is especially so when a personal transgression creates a public scandal, as that of a high government official surely does.

Abortion is evil. The evil is not one of degree, nor does its wrongness depend upon a particular situation or on its relationship to another act. Killing an unborn child is intrinsically evil, in and of itself. Thus it is condemned as a mortal sin, a heinous offense against God and against God’s people.

Advocating abortion is scandalous because it encourages others to sin. In Pelosi’s case, given her visibility and political prominence, the scandal can touch millions of others.

By persisting in her public advocacy of a so-called “right” to abortion, Pelosi has set herself outside the moral bounds of the Catholic community. Accordingly, she has no “right” to share in the Church’s key sacrament, the “source and summit of our faith,” as it’s called.

At bottom, Cordileone is not denying Communion to Pelosi as much as he is announcing that she has forfeited her qualification to participate in the sacrament.

This doesn’t mean she is no longer Catholic. A lot of people have leapt to a false conclusion: that Cordileone has excommunicated the House Speaker. This is not so.

Excommunication is a juridical act that expels someone from the Church. Pelosi has not been expelled. Nor, if she were to die anytime soon, would she necessarily be denied a Catholic funeral. That would be a matter for the archbishop’s prudential judgment. But one can’t imagine Cordileone refusing her a Mass of Christian burial, though in current circumstances, he might very well consider it advisable to make that service a low-key family affair, rather than a great public spectacle.

What the archbishop has done, rather, is an act of fraternal correction. He has pointed out to Pelosi that if she persists in receiving the Eucharist while in a state of mortal sin, she is committing a sacrilege and endangering her immortal soul.

In essence, he’s giving her an opportunity to recognize her sin, renounce it, and then return to the bosom of her faith family. Will she take the opportunity? Things look doubtful so far.

Interviewed on MSNBC’s “Morning Joe” show, Pelosi tried to deflect the issue by criticizing Cordileone for being “'vehemently' against LGBTQ rights.” She even contrasted the archbishop’s action against her with treatment of people who support capital punishment.

“I wonder about [the] death penalty, which I am opposed to,” she said. “So is the Church. But they take no action against people who may not share their view.”

In the end, she chose to hide behind a classic pro-abortion dodge, a variation on the old “I’m personally opposed, but…” cliché: “I come from a largely pro-life Italian-American Catholic family,” she said. “so I respect people’s views about [abortion]. But I don’t respect us foisting it onto others.”

Uncomfortable as Cordileone might be about seeing his action cast in political terms, there’s no avoiding politics. The editorial board of the San Francisco Examiner, the principal newspaper within the archdiocese, has already called on Pope Francis to remove him. Additionally, parish churches have been the targets of demonstrations and vandalism.

And of course, the fact that Pelosi was able to receive Holy Communion in Washington — an occurrence which must have been cleared with Cardinal Wilton Gregory, the local archbishop (and a prominent figure on the Catholic left), underscores the divisions that exist within the hierarchy of the American Church.

Gregory’s stance that everyone is “welcome” to receive Communion contrasts with the public pronouncements of more than 20 other U.S. dioceses, whose bishops stand in support of Cordileone. And while certain canon lawyers insist that it’s “nebulous” whether a bishop’s ruling applies outside his diocese, the disagreement on display among Church leaders creates a certain scandal in itself.

My own view is that Cordileone is Pelosi’s archbishop, and so she is subject to his spiritual authority (as a successor to the Apostles), no matter where she might be. And any priest (or bishop) who abets her in defying that authority does her immortal soul no favor.

In our cynical age, it’s hard to be optimistic about the consciences of political figures. But Nancy Pelosi is a child of God as much as any of us are, and the Holy Spirit is always at work.

So I choose to pray that this misguided woman might come to understand the seriousness of her sin, and repent.

Please join me in my supplications. Pray for Nancy Pelosi.