'Social Justice' Is Not Christian 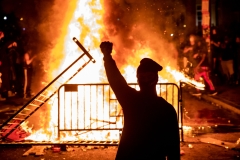 An individual raises a fist during the riots after the death of George Floyd. (Photo credit: SAMUEL CORUM/AFP via Getty Image)

“Christology” is one of those religious terms that seem complex and a little intimidating. It suggests some kind of elevated, ivory-tower, theological study carried on by obscure Vatican scholars.

Actually, it simply means understanding who Christ is: the image of God, the incarnation of all that is true.

Jesus made his identity clear. He said, “I am the way, the truth, and the life." God the Father confirmed this at the “transfiguration,” proclaiming to the apostles Peter, James and John, “This is my beloved son…listen to him.”

Another religious term which people often misunderstand is “ecumenism.”

Ecumenism is interfaith dialogue, and it’s a good thing to participate in, when it allows us to understand the teachings of other religions, to identify beliefs we might share with them, and find ways of living together in peace and cooperation.

However, people tend to think of ecumenism as blending or harmonizing the teachings of different faiths. That sort of doctrinal corner-cutting is called “syncretism,” and it’s a serious error — a kind of apostasy, even outright heresy.

Properly understood, ecumenism may call for mutual respect between religious groups, but it also requires an honest defense of what Christianity actually teaches.

Even Church leaders can be unclear in their understanding (or at least their expression) of concepts like Christology and ecumenism. Recently, an archbishop from Algeria gained some dubious press coverage that illustrates this confusion. Photographed in a posture of Muslim prayer, he was reported to have observed, “Islam puts us in touch with some truths that escape Christianity.”

Certainly, Islam has its own perspective on truth. And as with all non-Christian faiths, it may indeed offer us some insights that could enrich our own thinking.

But as Christians, we know that all truth is present in Jesus Christ. Nothing has escaped him, and nothing is lacking or incomplete in the teaching he’s passed down to us through his apostles.

There are those who feel compelled to supplement, compromise, or distort Catholic doctrine to advance other causes besides ecumenism. That’s all too clear in the current fevered advocacy of “social justice.”

Justice is a central concern of Christian teaching. The Gospels leave no doubt that Jesus placed special emphasis on helping the poor, on treating people fairly, on setting right the wrongs done to those mistreated or oppressed, on the need of all for forgiveness.

But social justice, as the term is generally applied these days, does not reflect Christian belief.

Christians are justified by Jesus Christ — living according to his Word, following his teaching. Our faith in him demands that we treat others justly. This not only involves a commitment to being charitable, but to inviting others to join us in adhering to the standards he set.

Social justice, on the other hand, holds up abstract and highly ideological conceptions of “right.” It calls us to excuse (or even to encourage) ways of living that are not at all consistent with the nature by which we are made and the behavior that Jesus modeled.

A stark example of this difference is the ideology of gender that’s such a prominent aspect of current social justice thinking. The very fact that God chose to come among us in the distinctive form of a man demonstrates the reality that human beings are created in his image with the complementary qualities of maleness and femaleness.

Social justice offers us an alphabet-soup assortment of gender characteristics and sexual inclinations (LGBTQ+). This is a false idea. It’s heretical. And Christians are not being just when they encourage, or even accept, such a proposition.

Another false idea is “equity.”

Christianity honors fairness, treating people equally as fellow creatures of God. It’s an ideal which isn’t always fulfilled, to be sure. By our fallen nature and sinful tendencies, we often fail to treat our brothers and sisters as equals. But our commitment to Jesus and the tradition of Judeo-Christian ethics impel us to try.

Social justice, on the other hand, assumes that equality can never be achieved, because the “system” locks certain groups into a position of permanent disadvantage. Hence, the ideology demands that economic arrangements be altered so everyone enjoys the same results, even if their abilities and efforts are different.

This is impossible to achieve, yet it’s presented as justice. More to the point, it’s given a Christian gloss.

We saw this thinking in action during the riots that raged in many of our cities last year. Buildings were burning, people were dying. Yet the claim was made that Jesus would have endorsed such mayhem, because it had the (alleged) objective of redressing past injustices and making the country more “equitable.”

Social justice is not Christian. It does not reflect a Christian understanding of justice. It does not fit the Christology of Jesus. It’s a distorted attempt to create a “perfect” world, according to a vision of perfection that’s cast in the image of man, and is quite aside from what God understands as perfection.