We Don't go to Church for Ourselves 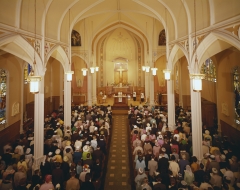 Among the best known scenes from scripture is that passage in the Gospel of Matthew where Christ issues his famous challenge to Simon Peter and his brother, Andrew: “Come after me, and I will make you fishers of men.”

The “fishers of men” part reflects a disarming use of humor and irony which was one of Jesus’ attractive personal qualities. Peter and Andrew, being fishermen, would have gotten the point.

The “come after me” part (sometimes rendered “come follow me”) is widely quoted as an invitation to Christian life. It’s the theme of numerous hymns and sacred songs. But it doesn’t quite capture the character Jesus’ words would have had, as recorded in the original scriptural Greek.

Greco-Roman culture — the ethos that dominated the Mediterranean world in Jesus’ time — featured a wide variety of gods and cults. One’s relationship to all those deities was not a matter of private belief. Rather, individuals were expected to exhibit the highly regarded virtue of piety (pietas in Latin).

Today we think of piety as an expression of personal devotion (it’s one of the Gifts of the Holy Spirit). But the Greeks and Romans understood piety as “public duty,” “religious conduct,” the carrying out of certain prescribed “sacrificial acts.”

Since scriptural Greek derived from that cultural context, Jesus’ words would have been seen less as an invitation than as a command. Essentially, he was ordering Peter and Andrew, in almost a military way, to “fall in!”

Christianity transformed our understanding of religion. Perhaps the greatest change in history has been from the pagan ritualism of ancient times, to faith as a personal commitment. Clearly, God wants our hearts.

But something has been lost throughout this transition, or at least significantly weakened.

Especially in recent times, we’ve come to assume that faith is largely an emotional response. And from that, we’ve jumped to the conclusion that if religion is all about feelings, then religious ritual isn’t important. Who needs to worship in the company of other people, to participate in some public display, if all that matters is how you feel about God?

Consequently, church attendance has plunged. Among Catholics it’s down to around 20 percent. If current trends continue, it will soon be little more than half that.

This represents a persistent and staggering falloff. According to the Gallup organization, about 75 percent of Catholics attended Mass during the 1950s. By the late ’70s that had dropped to around 50 percent.

COVID has taken the blame for recent declines, and there’s no denying the impact of the pandemic. Some people reasoned that if church services could be deemed non-essential under certain conditions, what makes them essential when conditions change?

Others got into the habit of watching live-streamed (or even pre-recorded) Masses during the lockdowns. Now they see no particular justification for going to the trouble of driving to church.

Of course, the prevailing atmosphere of society today is one of practical atheism. Given the secularizing influence of our politics, our media, our popular culture, and our educational system (even, unfortunately, many Catholic schools and colleges), it’s a challenge to maintain regular religious practice. All social forces are aligned to discourage you.

Add to that the pervasiveness of entertainment in our society. We're accustomed to constantly being amused. We’re bombarded by a host of diverting sounds and images at every turn.

From the perspective of sensory engagement, the prayers, readings, and often less-than-rousing homilies and music of a typical weekly Mass don’t meet our heightened expectations of public spectacle. We often come away feeling very ungratified.

The answer to that question lies in Jesus’ admonition to Peter and Andrew. We are called to come after him. Or, harking back to scriptural Greek, we’re commanded to do so.

Mass is the time when we live out our duty as Christians to express our faith in a visible and communal way.

The point isn’t sensory engagement or personal gratification. And while a good homily can provoke introspection or offer insight and encouragement, Mass isn’t primarily about helping us work through the issues we face in our lives.

It’s about giving glory to God.

Now, none of this is to excuse priests for shoddy, off-the-cuff preaching, or lectors for careless, unprepared reading, or music ministers for ill-chosen songs and amateurish presentation. If worshipers are to glorify God by their presence and participation, then certainly individuals who have liturgical responsibilities owe the Lord their best efforts.

But we need to keep our priorities straight. We go to Mass for God.

Perhaps the old Baltimore Catechism put it best: Why did God make us? To know him, to love, him, and to serve him in this world, and to be happy with him forever in heaven.

An English priest named Robert Hugh Benson, a convert from Anglicanism who taught at Trinity College, looked at it from another angle. Counseling his students very succinctly on the topic of worship, he said, “Choose the Mass, or choose hell.”

There’s a bit of practical icing on this cake, I should note. Recent research suggests a positive link between worship participation and mental health. A group of social scientists examined deaths attributed to despair — suicides, drug overdoses, etc. — and found markedly lower rates of such fatalities among people who attend religious services regularly.

All of which should come as no surprise. The Lord knows what’s best for us.