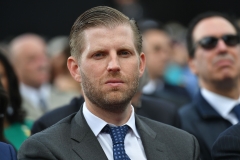 U.S. businessman and son of the U.S. president Eric Trump attends a French-U.S. ceremony at the Normandy American Cemetery and Memorial in Colleville-sur-Mer, Normandy, northwestern France, on June 6, 2019, as part of D-Day commemorations. (Photo credit: MANDEL NGAN/AFP via Getty Images)

But at least a few mainstream media outlets used the Fox News interview as an opportunity to misrepresent Eric Trump's opinions on the pandemic as it pertained to the upcoming presidential election.

"What are the consequences...politically, when you look at your father and you look at the campaign and the election is how many months away, the more the lockdown continues, the more difficult it is. Joe Biden is staying in his basement and, you know, your father is chomping to get out and they're basically saying nobody can go out in New York City, in Los Angeles. How is that going to impact the elections?" Judge Jeanine Pirro asked the president's son.

"Well, listen, the election is 176 days, to be exact, away and listen, Biden loves this," Eric Trump responded. "Biden can't go on stage without making some horrible blunder. I mean, even from his basement he's making awful gaffes every single day so his campaign is thrilled that he's not going out there and they think they're taking away Donald Trump's greatest tool, which is being able to go into an arena and fill it with 50,000 people every single time, right?"

"So they will and you watch, [Democrats will] milk it every single day between now and November 3rd and guess what, after November 3rd, coronavirus will magically all of a sudden go away and disappear and everybody will be able to reopen -- they're trying to deprive him of his greatest asset."

Anyone with a basic understanding of context clues should understand that when the president's son says "magically all of a sudden go away and disappear," he is referencing politicization of the pandemic, not all incidences of the virus itself. He is arguing that, after the election, Democrats will quit advocating for the strictest lockdown policies to combat coronavirus, since there will be no presidential candidate Donald Trump whose speeches they want to squelch.

And yet this was not the mainstream media's portrayal of Eric Trump's remarks.

"We're in the middle of the biggest public health emergency in a century, with almost 90,000 Americans dead, 1.5 million infected, and 36 million workers newly jobless, so for Eric Trump to claim that the coronavirus is a political hoax that will ‘magically’ disappear is absolutely stunning and unbelievably reckless," Biden campaign spokeswoman Kate Bedingfield said, according to Axios.

Most mystifying in all of this is the absence of Facebook and Twitter, companies which have pledged to fight COVID-19 fake news. Just kidding. Witnessing one part of the leftist apparatus lash out at another instead of a conservative would be almost as strange as spotting a shark chewing its own tail with a kid treading water just a few feet away.

Rob Shimshock is the Commentary Editor at CNSNews.com. He has covered education, culture, media, technology, and politics for a variety of national outlets, hosted the Campus Unmasked YouTube show, and was named to The Washington Examiner's "30 Under 30" list.