While vaccines can help, mandates cannot 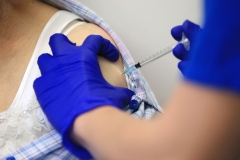 Almost by accident, Edward Jenner and others stumbled on the apparent resistance to smallpox clearly evident in milkmaids previously infected with cowpox. Not knowing why, they clumsily stumbled on what is still one of the most important medical discoveries of all time. Smallpox with its 30% mortality is estimated to have claimed some 500,000,000 lives globally throughout history.

Given that today Ebola Zaire carries a 90% mortality, there was probably as much resistance to smallpox vaccination as that for Ebola. Vaccine hesitancy has always been an issue. In the current Ebola Sudan outbreak in Uganda, it was recently reported that families denying the Ebola diagnosis were digging up their properly buried relatives in order to follow local social custom.

Skepticism is not just rampant in medicine. Social distrust on many issues has exploded. What is this new indignation? Once we vaccinated our children to prevent disease in them. Now we demand the children of others also be vaccinated in order to protect our own.

This self-righteous attitude is not limited to vaccinations. It is rampant among climate change activists. What would this have looked like for smokers in the 70s? Could we have mandated that all smokers enter smoking-cessation programs?

While I don’t smoke, and I do recommend vaccines, I stay in my lane. My health is not someone else’s responsibility. I have no right to make this demand. This is especially true when mandated fixes are bound to have unexpected results.

Unintended and even disastrous consequences have happened in the clamor for a vaccine solution. Around the middle 1950s, search for a polio cure was at a fever pitch. Two types of polio vaccines were developed. The Salk vaccine contained a killed virus, and the Sabin version a live, but weakened, form of polio.

Both vaccines had hidden issues not apparent at first. Some of Salk’s killed virus vaccines produced at Cutter Labs in California contained live, fully virulent polio. Many who received the contaminated batches developed polio. Some suffered lifelong debilitation and almost a dozen died. The oral Sabin vaccine used a live but greatly weakened form. Orally vaccinated children shed live, attenuated polio virus in their stool and so “vaccinated” other children by cross contamination. However, after several iterations through these children, the weakened oral virus was prone to regaining its full strength and again caused severe wild type polio.

The situation with vaccines is no different today. Even though the first SARS-CoV-2 messenger RNA vaccine was a good start and initially showed effectiveness, some apparent injuries may have occurred. Messenger RNA vaccines are not new, being first developed in the 1990s.

The SARS-CoV-2 messenger RNA vaccine did not use a virus vector to get into the cell. It used a lipid coating around a messenger RNA fully developed from viral nucleic acid sequencing. The problem here is choosing what segment of the virus to sequence. Hence different SARS-CoV-2 vaccines can have different efficacies.

Were some vaccine proponents blinded into thinking this new vaccine would be perfect and without any consequences? Yes, there were. Were some blindly opposed to the Coronavirus inoculation of the same mind as those who opposed the first smallpox vaccine? Yes, there were.

It is very possible we are repeating the mistakes of polio vaccine development with our technological overconfidence. Just like polio, each and every SARS-CoV-2 vaccine can have its own negative consequences.

I’ll never forget the time I was treating my severely ill daughter. My wife, a nurse, looking at her medication suddenly looked at me with shock and exclaimed, “Did you know that this medicine is a poison?”

I calmly replied, “Stacy, every medicine I use for everything is a poison.” Each has a safety limit which has been determined from proper testing. While I don’t have the time here to share even a summary of three dozen years of practice experience using medicines, vaccines are no different from any drug.

What has really changed since Jenner and smallpox? Vaccine vitriol is no different. Proponents are no less enthusiastic. Like an escalating war, each side has become more and more determined to win. Each thinks they are right.

While I think vaccines are a significant arsenal in my medical bag, and sometimes the only weapon for a particular infection, I choose to respect those that don’t. I also refuse to believe that my health is dependent on their medical decisions.

I am not entitled to make the general public wash their hands after using the restroom even though there likely would be significant health benefits. I’m also not entitled to any similar public health mandate at the expense of another’s right to refuse.

Such mandates are more than just a public health issue. When mandates rise, everyone’s freedom falls. Even those calling for those mandates will suffer from them.