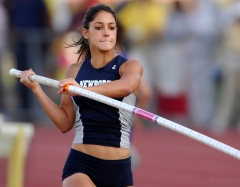 Female athlete performance is threatened by the entry of biological males into their competitions. (Photo credit: Kirby Lee/WireImage)

On March 30, Idaho Gov. Brad Little signed the Fairness in Women’s Sports Act, the first state law protecting female athletes from being forced to compete against males who identify as female. This law was enacted in response to the tragic situation in Connecticut, where female track athletes have been denied a fair chance at victory for years.

The Connecticut Interscholastic Athletic Conference allows all males who identify as female to compete in the female category. As a result, two male track athletes have won 15 state championships and taken 85 chances to compete at higher levels of competition over the last four years. Many female athletes, such as ADF clients Selina Soule, Alanna Smith, Chelsea Mitchell, and Ashley Nicoletti, have been denied the thrill of victory and walked away from the track heartbroken, despite their countless hours of hard work.

The American Civil Liberties Union (ACLU) quickly challenged Idaho’s law in federal court, and the State of Idaho is preparing to defend its important law in court. But ADF is also moving to intervene to represent two collegiate female athletes who are protected by the law, and who want to fight to make sure that it is upheld in court.

Here are three reasons why the ACLU’s arguments against the Fairness in Women’s Sports Act miss the mark.

1. Males have numerous unfair athletic advantages over girls and women.

Allowing athletes to compete on the basis of gender identity clearly discriminates against female athletes. Men are not going to care if a female sprinter (who identifies as male) is allowed to compete in a male track meet. But women will care, and they should be concerned. The data show that even elite female athletes have no chance against comparably gifted and trained males.

The ACLU would have everyone believe that males can take hormone blockers to make their bodies identical to those of women. The CIAC policy doesn’t even require hormone blockers, but regardless, they don’t solve the unfairness.

Men have numerous athletic advantages over women, such as larger lung size, greater bone size and density, and greater muscle mass. No amount of surgeries or hormone blockers can erase these advantages. In fact, published scientific studies have found that cross-sex hormones have little or no effect on the competitive advantage of men who want to identify as women.

The only way to protect a level playing field for women is to prohibit males from competing in the female category.

2. Title IX protects student athletes on the basis of “sex,” not “gender identity.”

Title IX guarantees that no person is denied participation in educational programs, including athletics, “on the basis of sex.” As a result, female participation in high school sports has multiplied by over 1,000 percent since Title IX passed in 1972.

But the ACLU is trying to distort Title IX in a way that would reverse this progress. In its complaint filed in federal court, the ACLU claims the word “sex” in Title IX includes “gender identity,” but this is incorrect. When Title IX was passed several decades ago, the universal meaning of the word “sex” was clearly biological sex. Hardly anyone had even heard of gender identity at that point.

Title IX already protects female athletes from unfair gender identity policies that deny biological reality. Idaho’s new law simply reinforces that protection. If the ACLU and its allies want Title IX to include “gender identity,” they’re free to petition Congress to amend the law. But they can’t just ask a judge to rewrite it. Only Congress possesses the power to write laws, and the Constitution is explicitly clear on this point.

3. All it takes is one male for every female competitor to be harmed.

In its complaint, the ACLU tries to minimize the harm caused by its desired policies, saying that “only a handful” of the nearly half a million NCAA athletes identify as transgender.

But even if there were “only a handful” of males competing in the female category, that would still destroy the level playing field for female athletes. The Connecticut championship records illustrate that it only takes one male athlete to push the fastest girl out of first place, and to push every girl down in the rankings.

This is, as Duke Law School Professor Doriane Lambelet Coleman testified to the United States House of Representatives Committee on the Judiciary, “because it only takes three male-bodied athletes to preclude the best females from the medal stand, and eight to exclude them from the track, it doesn’t matter if only a handful turn out to be gender nonconforming.”

Further, if girls are unable to win because they’ve been denied a fair playing field, they may quit sports altogether. Girls participation in sports has increased for decades—but if the ACLU has its way, those numbers could stagnate, or even spiral back down.

Males and females are not identical. They have irreversible differences that go down to the molecular level, and our laws should recognize this fact. When they don’t, women and girls are the ones who pay the price. The court should uphold Idaho’s Fairness in Women’s Sports Act to prevent this from happening.

Ryan Everson serves as Alliance Defending Freedom's Communication Integrity Specialist. He worked as a Washington, D.C. Catholic and political journalist before coming on board with ADF in July 2019. Ryan graduated from Arizona State University and works out of ADF's office in Scottsdale, Ariz.

Editor's Note: This piece was originally published on the Alliance Defending Freedom. To learn more about the ADF's campaign to protect young women in sports, click here.